Largest one last Thursday along the Canadian River 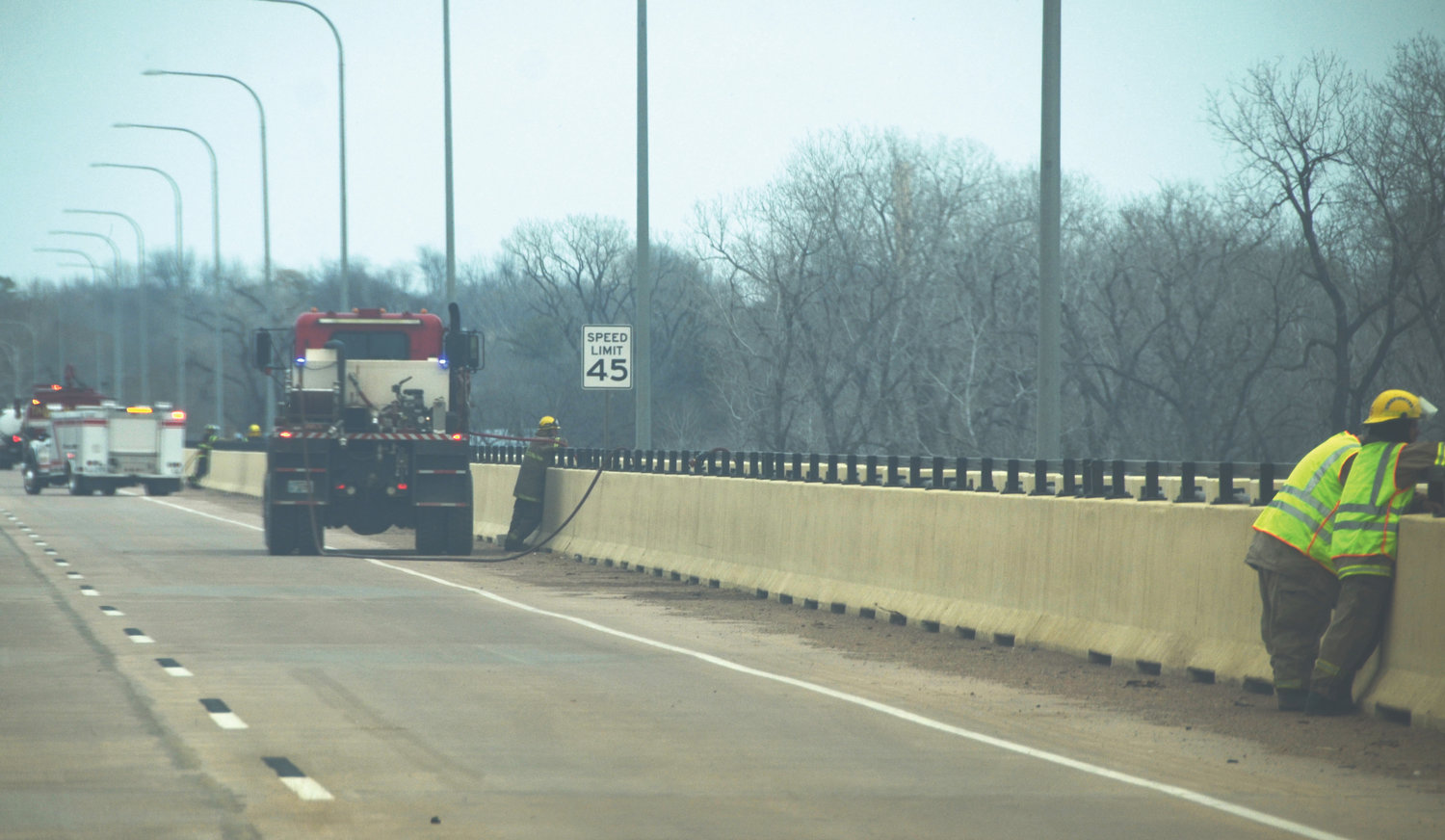 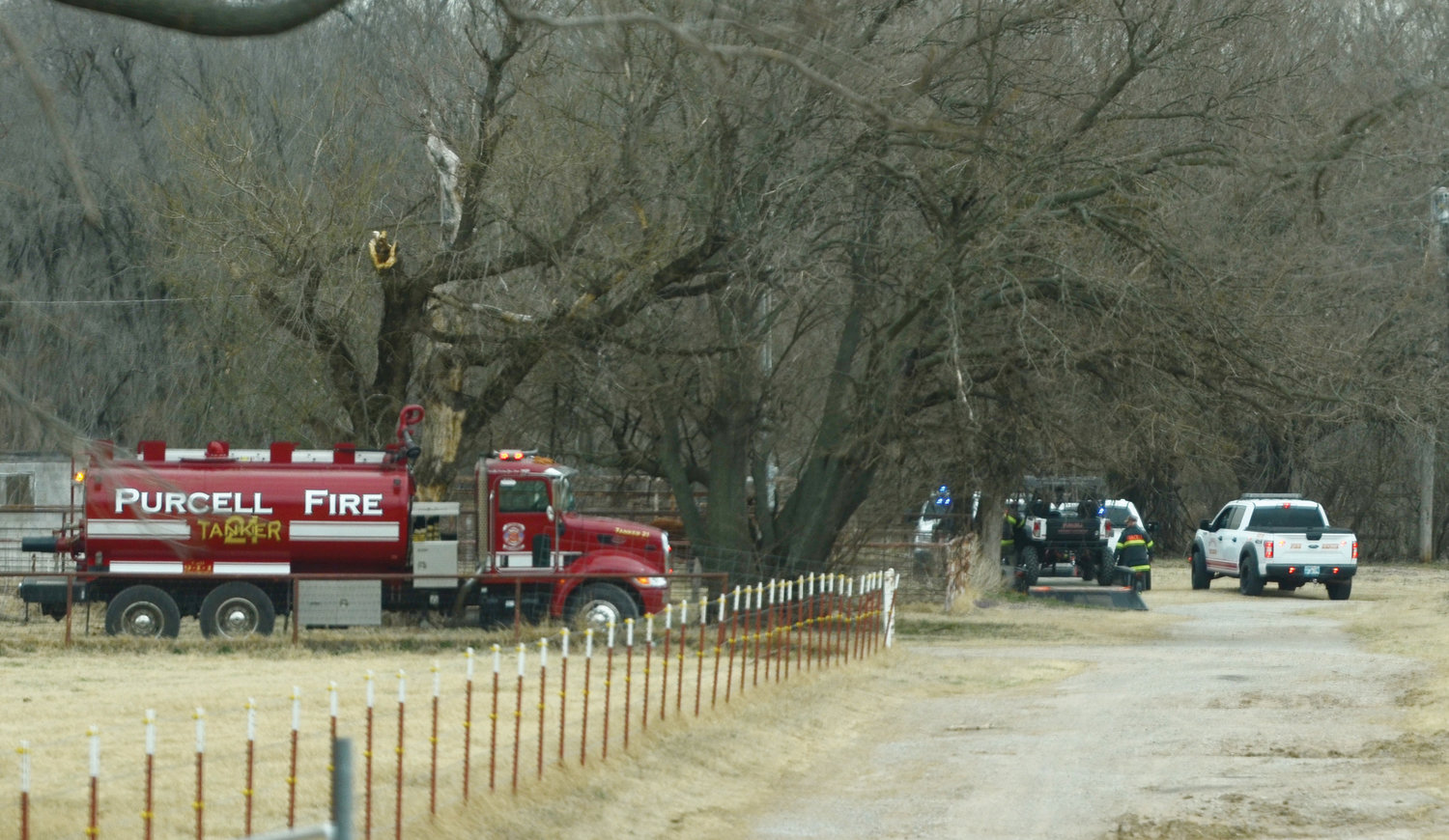 Purcell firefighters set up a staging area near the Canadian River to fight a blaze that destroyed around 1,800 acres along the McClain and Cleveland county border. The first staging area was down by Wayne. The fire kept moving and finally the third and final staging area was set up at the Santa Fe Depot.

Purcell firefighters prepare to cut off an out-of-control wildfire from atop the James C. Nance Bridge last week amid high winds and dry conditions.
Previous Next
Posted Thursday, March 24, 2022 9:00 am
John D. Montgomery

The biggest fire was the one Thursday that eventually had first responders evacuate residents from homes on Canadian and Santa Fe streets in Purcell for a time.

The fire started along the Canadian River at 170th and Gallamore around 4 p.m. Wednesday but firemen were unable to access the blaze due to water surrounding it.

So it burned all night Wednesday and into Thursday morning when fire chief Greg Cypert said firefighters set up a staging area nearby.

That staging area was moved to property just east of Bravo’s which was later moved to the train depot where they stayed until the blaze was brought under control around 7 p.m.

Firefighters were on the fire from around 10:30 a.m. to 7 p.m. when an estimated 1,800 acres of grassland and cedar trees were torched.

“I thought we had a good game plan when we staged near Wayne,” Cypert said. “But that quickly changed and we moved to just east of Bravos and then moved to the depot hill.

It was at the James C. Nance Memorial Bridge that assistant chief Rocky Claunch launched a plan to have tankers on the bridge to bring massive amounts of water when the fire finally reached the bridge.

Claunch stationed four large tanker trucks on the bridge for the maneuver.

Claunch said thanks to dozer work by David Spector and Derrick Neal, fire trucks were able to maneuver around and eventually put the fire out some 200 yards north of the bridge.

“They pushed the vegetation back and cut us some trails north of the bridge where we could get trucks in there,” Claunch said. “Otherwise, we could have lost it again.”

Fire crews from Wayne, Payne, Lexington, Slaughterville, Cedar Country, Washington, Noble and Goldsby helped battle the blaze. The Chickasaw Nation provided a drone at one point to give firemen a better understanding of what they were up against.

City Manager Dale Bunn praised the efforts of all involved keeping the fire from getting into town.

“Chief Cypert and Assistant Chief Claunch performed a tactical move they should teach at fire fighting school,” Bunn said. “They used tankers pouring water from the bridge onto the path of the fire. They had brush trucks under the bridge waiting for the flames.

“Michael Minor set up his manned Water Department teams for tanker refill sites at hydrants at the bottom of Depot Hill and the corner of the bridge at Canadian.

“Police Chief Bobby Elmore and Assistant Chief James Bolling controlled traffic and closed the bridge while tankers were on it,” Bunn continued. “The street department blocked eastbound traffic at Washington and Main and southbound at Washington,” Bunn said.

There were no reported injuries and no structures lost in the big blaze last Thursday.

Cypert said his crews were back under the bridge Friday morning from around 9:30 to 11 a.m. putting out spot fires.

Firefighters from Dibble and Rosedale helped later on down near Wayne, Cypert said.

The origin of the fire remains unknown.

While firemen were attacking the big blaze they were also called to a fire on Horse Avenue and to a hit and run scene at mile marker 86.5.

Firefighters were back at Wayne for three to four hours Friday still working on the big fire. Smoke could still be detected Monday morning five days after the fire started.

Purcell Fighters responded to a grass fire in the Cole area Sunday. They joined fire teams from Blanchard, Cole, Dibble, Goldsby, Newcastle, Payne and Rosedale. Purcell was also called out to a dumpster fire on Sunday.

A welcome and much needed downpour of rain fell (1.80”)on the area Monday.