Another laugher for Warriors 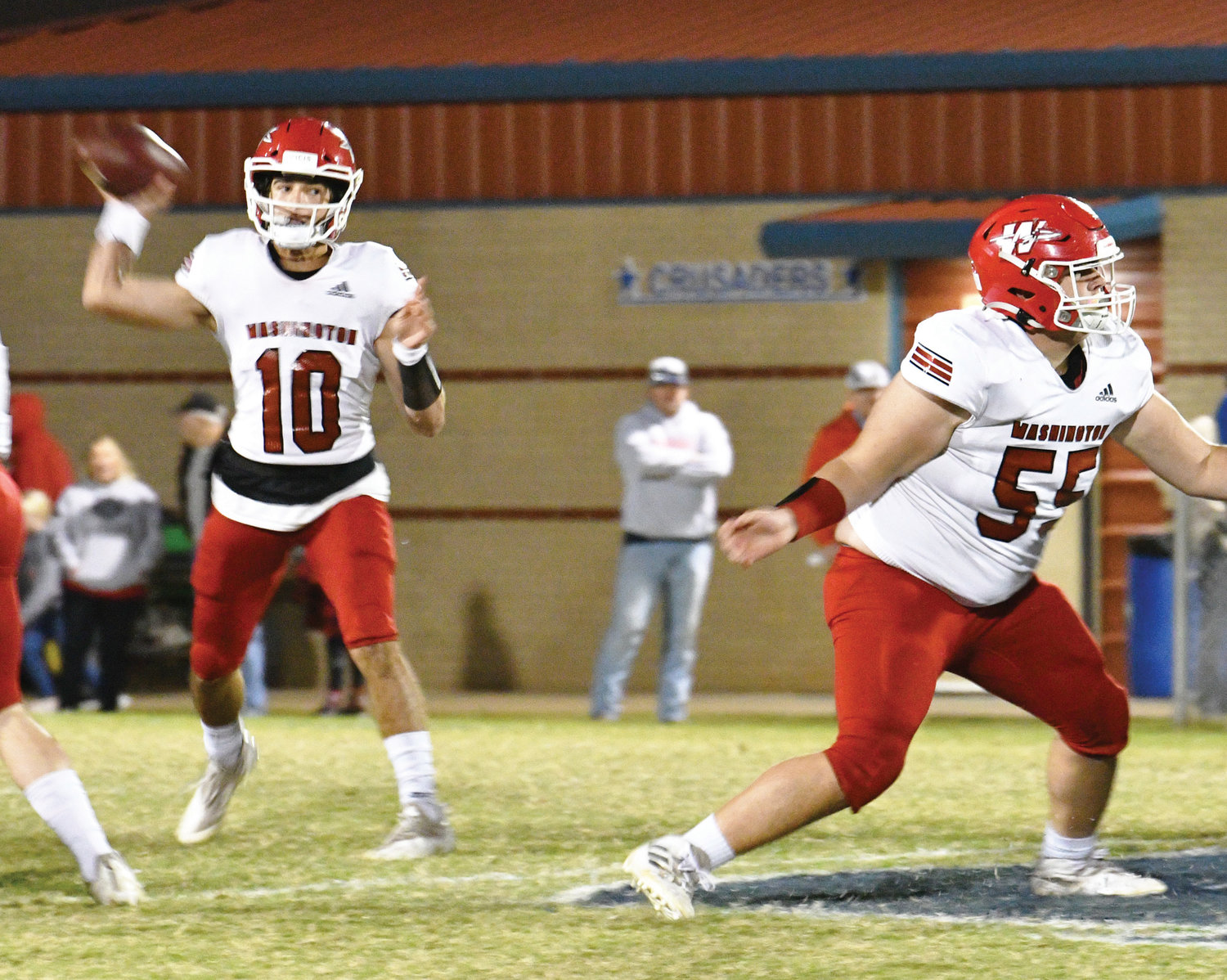 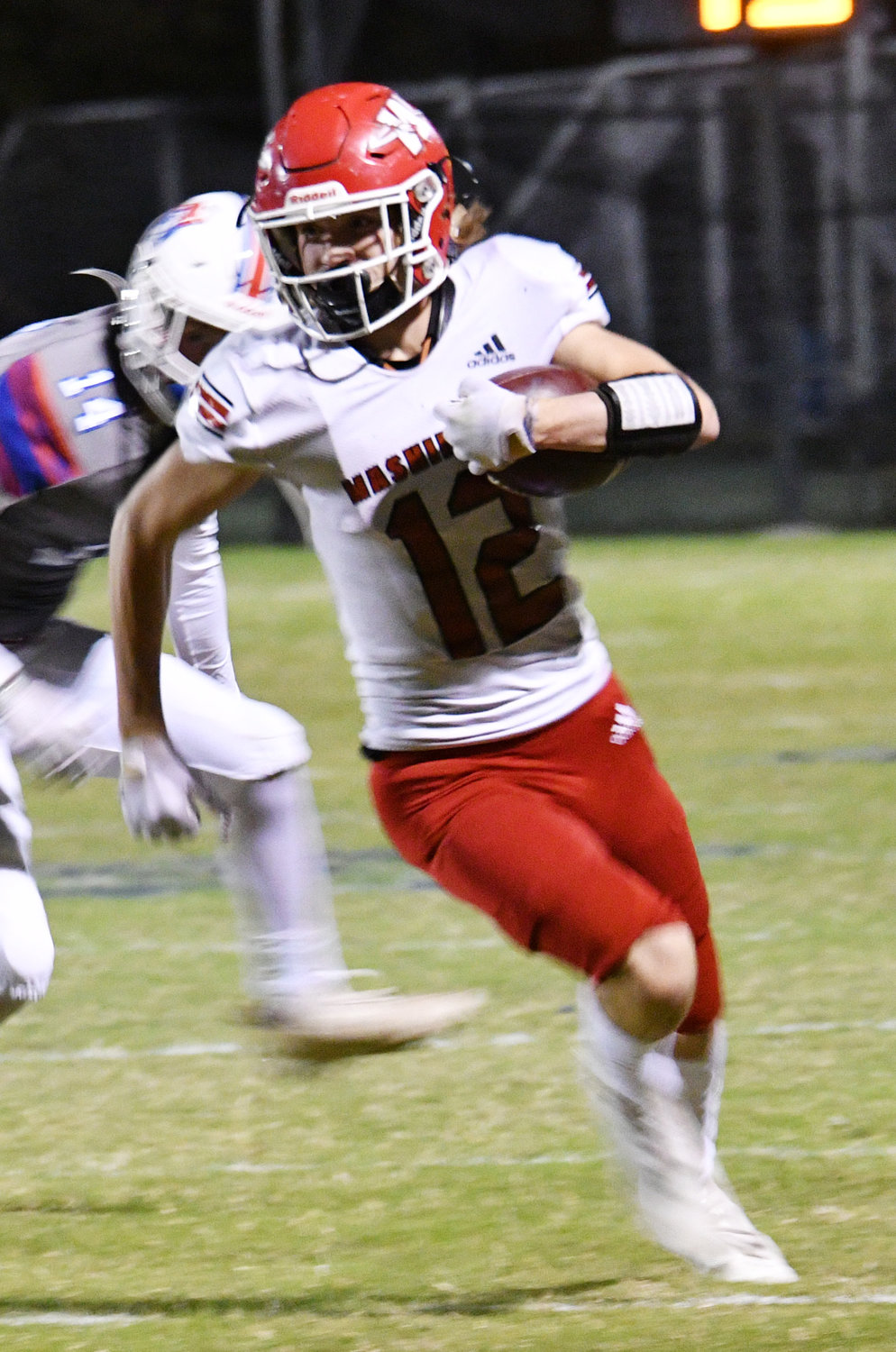 Wide receiver Cage Morris gets upfield for more yards during Washington’s win over CHA. The Class 2A No. 1 Warriors kick off with Comanche this Friday at Reed Field at 7 p.m.
Ron Ladlee
Previous Next
Posted Wednesday, November 10, 2021 9:00 am
John D. Montgomery

Christian Heritage Academy was the latest victim for the No. 1 ranked Washington Warriors when they whitewashed the Crusaders 59-0 last Friday night in Norman.

Washington’s defense hasn’t been scored on since Oct. 8. Lexington fell on a fumble in the end zone for a safety on the offense Oct. 14.

No one has been in the Warrior end zone since Oct. 8 when CCS scored a touchdown.

“Overall, I was very pleased by the way both our offense and defense played,” head coach Brad Beller said. “That was our best first quarter on both sides of the ball we’ve played all year. They executed at a high level.”

Beller said the thing that really caught his eye on the defensive side of the ball was the speed of his players.

“I noticed how fast and physical we were. We just did a great job of getting to the football,” he said.

Jamison Holland had a key interception in the first quarter while the offense was racking up big numbers.

“We rotated a ton of guys in on defense and everyone that went in did their job to make plays,” Beller said.

The Warriors scored four touchdowns in the first period alone.

Quarterback Major Cantrell tossed a trio of cross country touchdown passes, the first one an 83 yard beauty to Lane Steele. Cantrell hooked up with Kobe Scott for a 35 yard score for Washington’s second tally of the quarter and then found Luke Hendrix on a 50 yard scoring strike.

Cole Scott closed out the first period rampage with a 57 yard gallop to pay dirt.

Scott scored two more touchdowns in the second quarter on runs of one and 29 yards sandwiched around a Sam Hegeman 28 yard field goal.

“As many yards as Cole has gained this season that was the first game where he scored three touchdowns,” the coach said.

Scott finished the game with eight carries for 116 yards.

“We were very efficient running and throwing,” Beller said of his offense that scored four out of their first six plays. We only had one negative play in the first quarter and that was a bad snap.”

Backup signal caller Jaxon Hendrix got into the act passing 13 yards to Nate Roberts for Washington’s only score in the third period.

The final touchdown of the night was an 80 yard romp by Brayden Arthur.

“We weren’t trying to score,” Beller related. “We just ran up the middle. Both Major Cantrell and Jaxon Hendrix did a good job of running the offense.”

They spread the wealth around to five different receivers.

On the defensive side of the ball, Cole Beller led the tackling with 10 stops and a quarterback sack. Hudson Howard registered seven tackles while Case Taylor had six stops including two for losses. Dominik Jackson had five tackles and the Warriors got interceptions by Tanner Olson and Jamison Holland.

As district champions the Warriors host this week when Comanche rolls into town for a 7 p.m. kickoff Friday night.

The 7-3 Indians have lost to Marlow, Davis and Lindsay.

“They are very, very athletic at the skill positions,” Beller reports. “Two years ago their skill players were all sophomores so they are a veteran team in that department.

“The key for us will be slowing their skill kids, especially their quarterback. He’s got a good arm but is a dual threat and is even more scary when he runs.”

“They like man coverage and just try to get physical with you on the edge. They want to force you to do everything up inside the tackles. They also take away the deep balls.

“We need to get off the field on third down. They are very efficient on third down,” the coach said. “We need to control our emotions and stay focused and enjoy every game.”

Washington Head Coach Brad Beller nominated Major Cantrell as the Offensive Player of the Week. Cantrell was 7-12 passing for 200 yards and three touchdowns.

The Offensive Lineman of the Week nomination went to Wyatt McCauley, who graded out at 86 percent.

Getting the nod as the Defensive Player of the week was Cole Beller, who had 10 tackles and a quarterback sack.

Beller nominated Dominik Jackson as the Defensive Lineman of the Week for his five tackle performance against CHA.