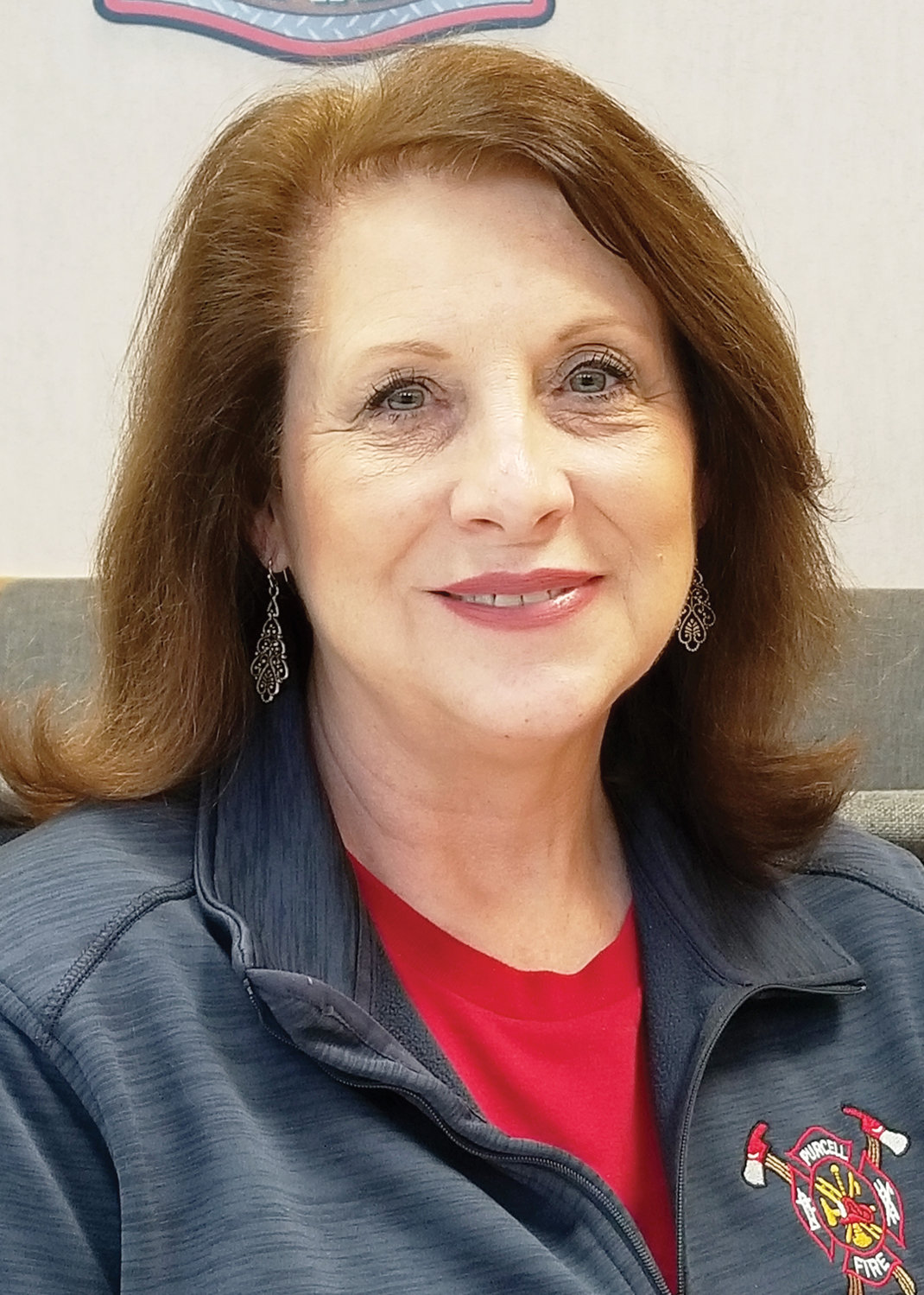 If it’s love, not blood, that makes a family, then it’s really no surprise 32 Purcell firefighters choose to call Kim Barnes “Mom.”

Since 2013, Kim has been the administrative assistant at the Purcell Fire Department.

Add to that she’s worked as the city’s purchasing officer for the City of Purcell.

It’s a niche that suits her well.

Kim was born and reared in Ada where she grew up the eldest of three children. Her first forays into the ranks of the employed were there.

She worked for a time for a car dealership and then for Citizens Bank. She later worked for banks in Mustang and Norman and later  for a Duncan day care.

She was living east of Lexington in 1995 when she began working in new accounts for First American Bank in Purcell.

She was there five years, juggling work and raising two young children at home.

“I learned a lot under Pat Mayes (bank owner). I really liked working for those people,” she said.

Her duties touched on numerous aspects of banking, but the biggest surprise was when Mayes called her to his office one morning.

He had an attorney on the telephone and introduced Kim as the escrow agent for Stonewall Plaza Apartments.

She got the job and started working in 2000.

“I was under Wayne Maxwell until he retired and was followed by Tony Christian,” she said. “I paid every one of the bills for that high school.”

It was a complex and daunting task. Kim had a closet that contained nothing but boxes of construction documents – architect’s plans, bids, companies that won the contracts and change orders.

She clerked for the district until 2010 when she retired.

For the next three years, she stayed home to care for her grand babies.

Her charges included a newborn, a 14-month-old and a 3-year-old.

In 2013, she started working as a part-time administrative assistant at the fire department.

“They needed somebody to keep the budget and do all the paperwork,” she said.

Her job went to full-time when city manager Dale Bunn tapped her to become the city’s purchasing officer.

Kim spends roughly one-half day on purchasing and the other half on fire department tasks.

“I love it here. These are good people to work with,” she said.

There were other life changes when she divorced her husband of 38 years. Six years ago she bought a home in Purcell.

The best part of her job, she said, is the people she works with. All those firefighters who call her “Mom.”

Watching firefighters do “whatever they can to help people,” she explained. “They are absolutely selfless and so giving to other people. All are like that from the chief all the way down.

“What makes the job worthwhile is everybody helps one another.”

Perhaps the most memorable event is one that still brings tears to Kim’s eyes.

In July 2017, firefighters were dispatched to a bad wreck at mile marker 91 on I-35 south of Purcell.

Horror awaited them there.

Killed at the scene were two  children – a 10-year-old boy and 11-year-old girl.

A 13-year-old girl was airlifted to a hospital where doctors took her off life support when it was determined she had no brain activity.

The driver died after arriving at the hospital.

Kim received a call from Rocky Claunch, the assistant chief.

“You need to call Justin Blankenship,” he told her. “There are kids involved. The guys will need counseling when they get back.”

Kim called the Landmark Church pastor and then called Ann Cypert, the chief’s wife, to tell her they needed to cook supper for the firefighters and have it ready by the time they returned to the station.

“I remember the trucks pulling in, the looks on those boys’ faces. It was just awful,” she recalled.

Kim went from firefighter to firefighter, taking their faces in her hands and asking the same question over and over.

One new firefighter she told  “Call your mama and let her know you are OK.”

She also soaked chill rags and draped  them around each man’s neck. It was over 100 degrees that day.

To this day, she’s never read about the wreck or watched any of the television coverage.

“I didn’t want to see what those boys went through,” she said.

Time in the job has taught her that you can’t always tell if a firefighter is still dealing with trauma.

So she never asks questions  about what happened.

“But if they want to talk, they will come to my office and start talking,” she said. “Usually it’s when children are involved.

Kim will be 65 in October, but she doesn’t know if she will be ready for retirement.

Her family is close. Her father and stepmother, Bill and Ann Black, live in Purcell and her children and grandchildren aren’t far away.

Daughter Melissa Allen is a homemaker and lives in Noble.

Her other daughter, Regina Kraft, and son, Jacob Barnes, both live in Lexington. Regina is an RN and Jacob is a contract welder for Silver Star Construction.

There are six grandchildren – Kaden Kraft is a volunteer firefighter with the Lexington Fire Department. Kason and Krosby Kraft both attend Lexington schools.

But the fact is she’s embraced another, larger  extended family at Landmark Church.

She volunteers whenever the church issues a call and every third Sunday she works in the nursery.

“I’ve been to a lot of churches, but in this church I found something very different,” she said.