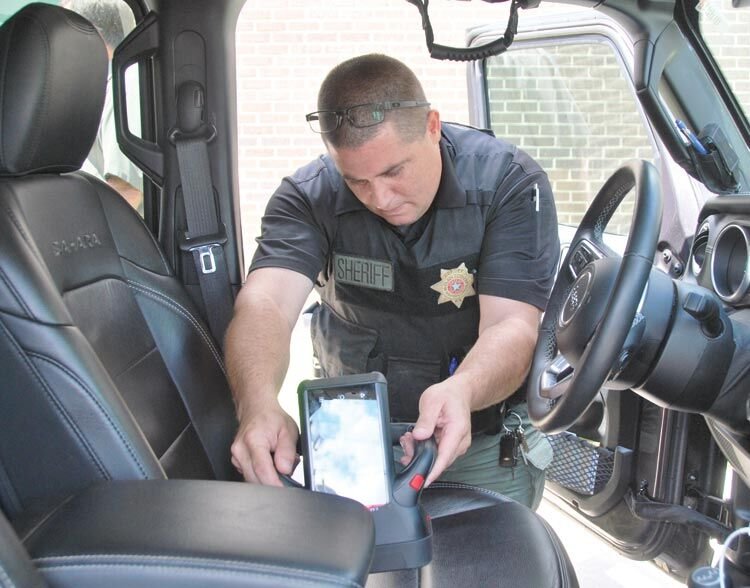 Sgt. David Childress with the McClain County Sheriff’s Department locates contraband beneath the driver’s seat as he demonstrates the department’s new HBI-120 handheld x-ray machine. The $40,000 technology was awarded to the department by Viken Detection Company. 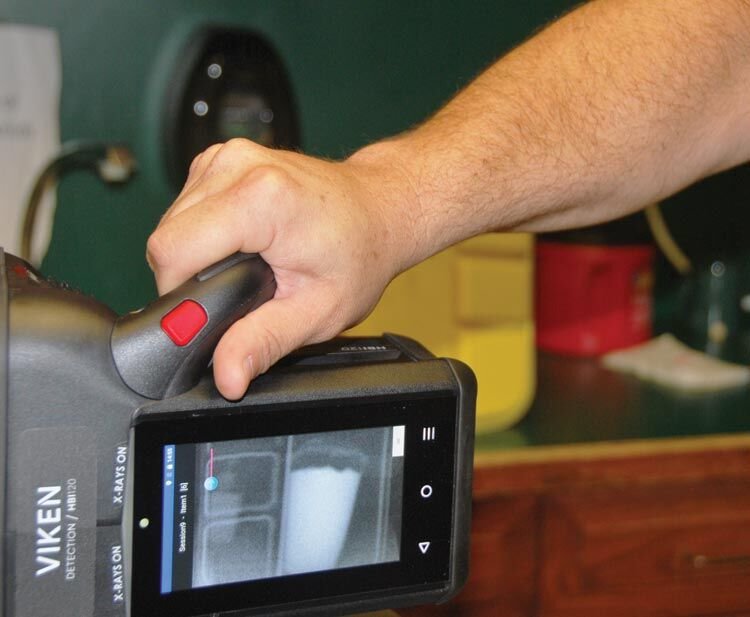 Not only did the McClain County Sheriff’s Department’s new Viken HBI-120 handheld x-ray machine reveal a cup in a freezer, it also showed the level of liquid in the cup.

He came away impressed and convinced in equal measure that, need notwithstanding, the device valued at $40,000 was simply unattainable given the department’s budget.

That all changed in 2020 in the middle of a global pandemic.

With the blessings of Sheriff Don Hewett, Childress and Deputy Tony Simpson applied for a “very competitive” grant and the McClain County Sheriff’s Department was one of five agencies nationwide selected by Viken to receive one of the machines gratis.

“Not only was the tool valued at $40,000,” Hewett said, “they (Viken Detection) flew and paid all expenses to Boston for a 2-day training period for the two deputies.”

The training consisted of scanning numerous types of metal, wood, cardboard boxes and cloth, as well as how to record all scans as evidence.

Awareness of laws pertaining to search and seizures was another topic of intense training.

Hewett said the technology is a new tool in the department’s ongoing war on illegal drugs in McClain County.

The machine is capable of scanning objects concealed in vehicle panels, tires and other hiding places in which narcotics, weapons, explosives and money may be secreted.

The Viken Detection Company is based in Burlington, Mass., and uses the competitive grant to gift a few of the machines to law enforcement agencies each year.

According to Viken CEO Jim Ryan, the company’s primary customer is the U.S. Border Patrol which has more than 1,000 units in use.

Childress, the department’s K-9 officer, said the technology is used together with the drug dog and is not a replacement for the dog.

The dog alerts to the presence of narcotics, he explained, and that gives the officer probable cause to search the vehicle using the HBI-120.

“This is another tool to see inside panels” without having to dismantle the vehicle, he said. “But it doesn’t replace good old fashioned police work.”

Childress said the District 21 Drug Task Force which covers Cleveland, McClain and Garvin Counties, also has one of the machines.

The machine doesn’t put out enough radiation to require any special shielding for the operator.

Still, Childress said they were cautioned at the training to not use it on people.

The sheriff said about four or five times a year, someone will leave an unattended briefcase or box in the courthouse.

“With this machine we can scan it immediately to make sure no explosives are enclosed,” he said. “Another great concept of this machine is it pinpoints the precise location of the hidden items so you’re not tearing up a car or other structure unless you absolutely see it and you know it absolutely is there.”

Childress and Simpson work opposite shifts so they can swap out the HBI-120 at the end of the day.

Hewett added the department will make the machine available to other agencies which may require it.