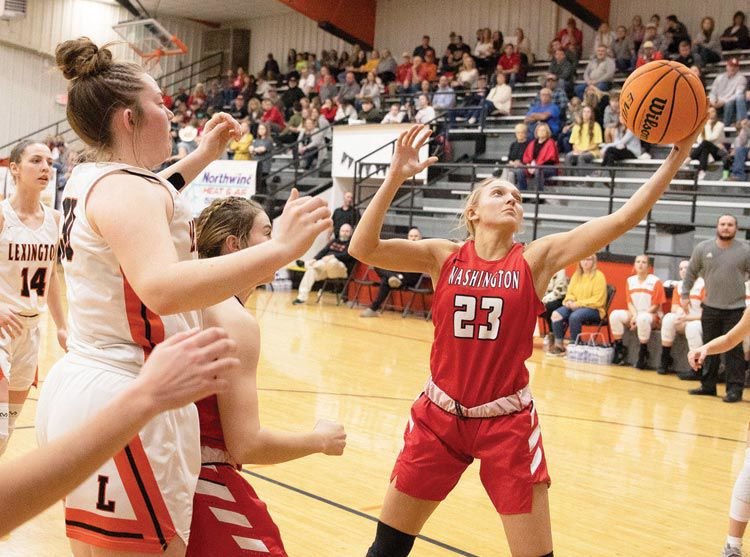 Mattie Richardson grabs a rebound during Washington’s 54-45 win over the No. 14 ranked Lexington Bulldogs.

The Washington Warriors are a classic Jekyll and Hyde tale.

They went on a streak where they won six of seven games.

Last week the shooting shadows of a slump crept in and they dropped two games to Marlow (46-43) and Lexington (50-42).

“We’ve kind of been up and down as far as shooting,” said Washington Head Coach TJ Scholz. “When we were winning we were shooting the ball better.”

Indeed the shooting has been up and down. The Warriors shot 19 percent in field goals against Lexington.

Scholz was pleased with the corrections his team made in rebounding during the Marlow game.

After taking it on the chin on the glass, Scholz spent extra time in film study with his team to show them where improvements were needed in rebounding.

It paid off against the Outlaws.

“We did a decent job correcting rebounding and turnover mistakes against Marlow,” Scholz said.

Marlow was held to six offensive rebounds, with only one costing Washington any points on the put back.

Hicks and Hendrix again led the team in scoring with 10 each.

No one is discouraged and the team continues to work hard and try to find ways to win games.

“I’ll take full responsibility for not putting guys in spots to be successful,” Scholz said. “Some guys are playing too many minutes again and I’ll try to do a better job as a coach to get guys more breaks and speed things up for us.”

The Washington girls, fresh off their Championship victory at the Little Axe Tournament added another quality win to their resume with a win over No. 14 ranked Lexington, 54-45.

“We’re so young and we’re just beginning to put some things together,” said Head Coach Rocky Clarke. “We’ve been working hard and we’ve never had a lack of effort.”

The Warriors had two players selected to the All Tournament team at Little Axe, including Tinley Lucas and Laylin Scheffe – who was the most valuable player.