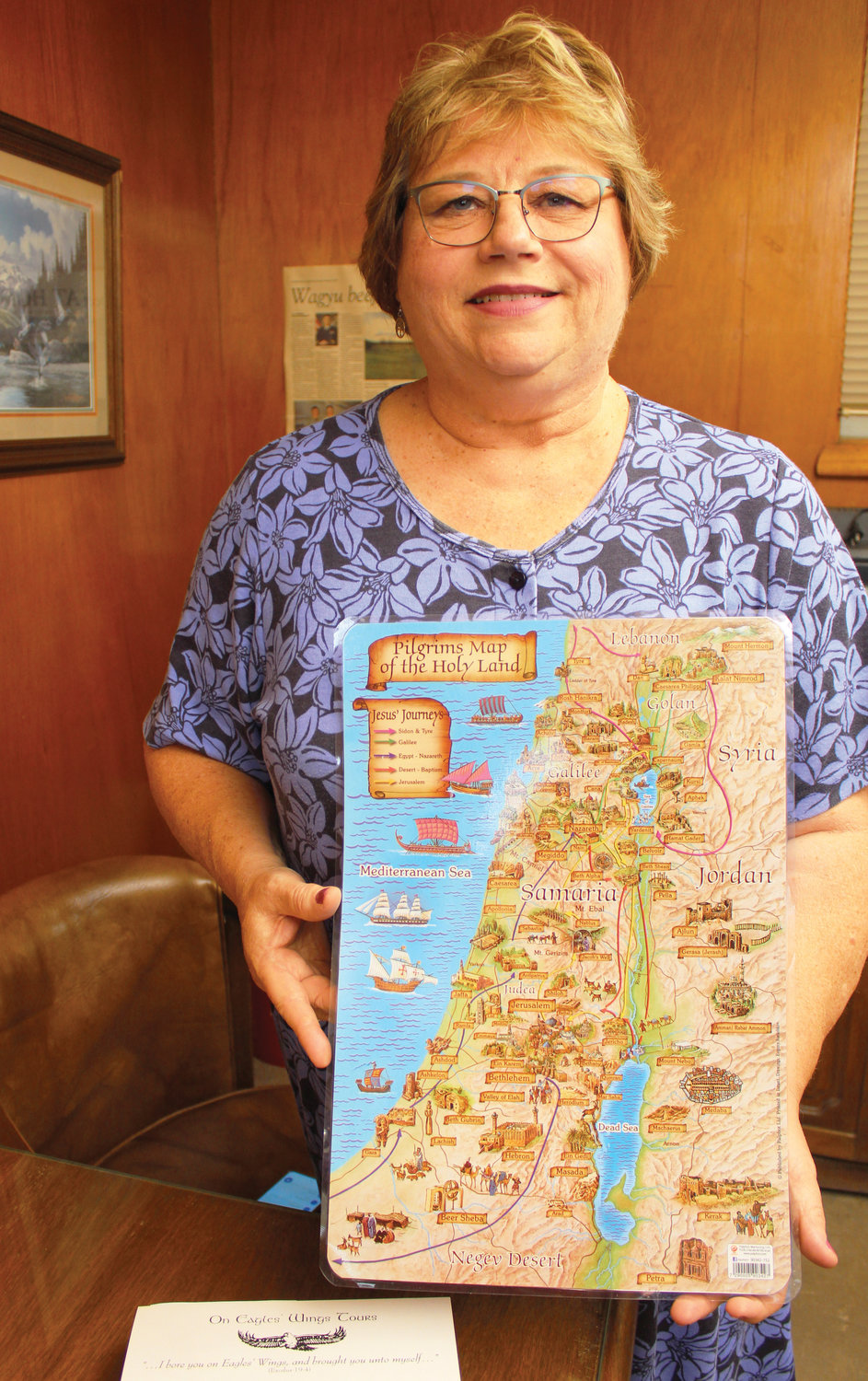 Elaine Howsley holds a map of ancient Israel. The pastor at First Christian Church, Disciples of Christ, is back from a 2-week tour that traced Jesus’ ministry.
Jeanne Grimes 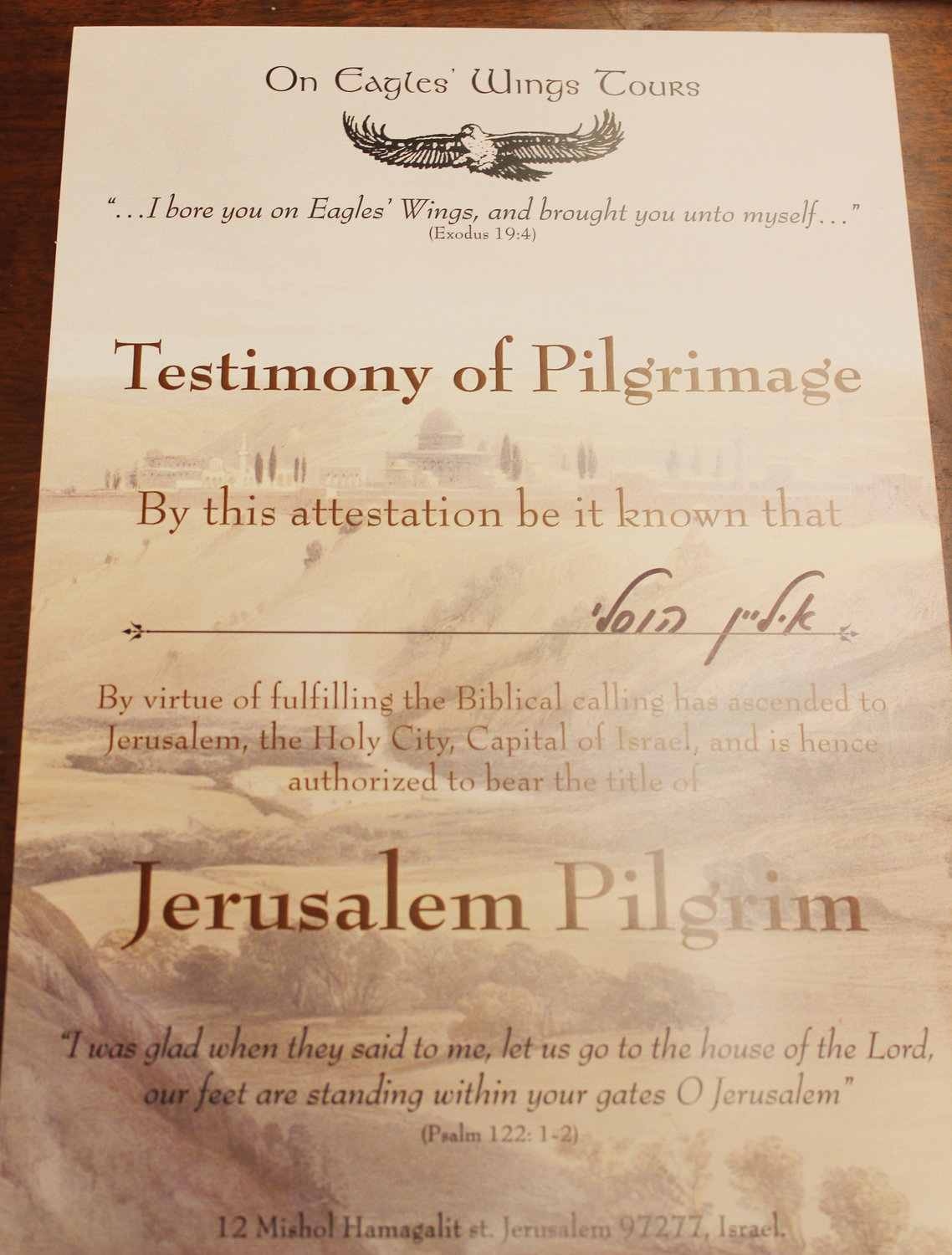 At the end of her visit to Israel, Elaine Howsley was certified a Jerusalem pilgrim. The certificate bears her name in Hebrew.
Jeanne Grimes
Previous Next
Posted Thursday, June 2, 2022 9:00 am
Jeannie Grimes

Walking where Jesus walked brought the Bible into a clearer focus for Elaine Howsley.

It all began in November when she went to dinner with a fellow Pauls Valley minister.

The Rev. Diana Pruitt is pastor of the town’s First United Methodist Church.

As they dined, Pruitt shared her plans to travel to Israel in May with a Methodist group, On Eagle’s Wings Tours through Journey Unlimited.

When Howsley voiced her own desire to one day visit the Holy Land, Pruitt encouraged her friend to join the group.

Howsley took her at her word and the international adventure began May 9 from the Tulsa airport.

Forty-two were in the group, including six from Pauls Valley.

They first had to clear customs and test negative for Covid  before they were allowed to leave the airport.

There they met Yoav, the tour guide from Jerusalem.

He and Aaron, their driver, were “just amazing,” Howsley said.

They traveled to Jerusalem where they stayed five days.

At the Mount of Olives, they “walked the same path Jesus rode the donkey on Palm Sunday,” she said.

They also visited Hezikiah’s Tunnel, which was dug to bring water into the walled city in the event of an Assyrian attack.

From Jerusalem, the group traveled to the Dead Sea where they spent 2-1/2 days. Howsley  took a very short camel ride.

“We got to float in the Dead Sea,” she said.

Next was one day in the Judean desert. They were warned of the region’s unforgiving heat, but their day in the desert was marked by mild temperatures and a cooling 40 mph wind – conditions Yoav assured them were unheard of in the harsh desert.

From there, the tour turned north to the Jordan River and the Sea of Galilee.

“We floated down the Jordan River and saw where Jesus was baptized,” she said.

They stayed in Tiberius for three days.

“That was a pivotal moment,” she said, adding the group spent roughly three hours there.

“We went to where King David was and toured some of Herod’s palaces,” she added.

Through it all, the feeling in the group was one of security.

At each stop, Harrison led the group in Scripture and brief devotionals.

The sites were a mixture of old and new testament.

Jerusalem itself takes in Muslim, Jewish and Christian sectors with each faith enforcing its own dress codes and rules of entry.

The Muslim sector is the most strict, as Bibles and Christian symbols may not be carried in.

Men and women are forbidden to touch and the dress code requires legs and elbows be covered.

In all sectors, reverence is the rule.

Waiting in line to enter, Howsley suddenly realized she had a small olive-wood cross in her pocket.

As she neared the checkpoint, she quickly removed the cross from her pocket and hid it in her bra.

“I carried contraband into the Muslim sector,” she said.

Although strictly forbidden, Harrison did lead the group in a Scripture reading and devotional while in the Muslim sector.

While in the sector, the group was able to visit the Western Wall, which Christians call the Wailing Wall - a visit Howsley called “amazing.”

The most holy Muslim site is Dome of the Rock, purportedly built atop the site of the holiest Jewish site, the Temple Mount, which was destroyed by Muslims.

Or maybe not. Yoav told the group that a Jewish man deliberately misled the Muslims about the Temple Mount’s true location,  sparing the most holy Jewish site.

There were also visits to Christian churches and Jewish synagogues.

The only part of the trip that didn’t run like clockwork was the journey home.

Howsley expected to be back the evening of May 21. But the 24-hour flight turned into an 81-hour ordeal.

When the flight from Tel Aviv landed at New York’s JFK Airport, the group learned their flight out of JFK had been cancelled because of a flight staff shortage and computer failure.

The airline put them up in a hotel. The next day, some of the passengers were able to get a flight out of JFK – not to Tulsa, but to Washington, D.C.’s Reagan International Airport.

“A huge storm blew in,” she recalled. “Looking out the windows was like looking at one of our tornado skies.”

It appeared they were stuck for another night. Several of the passengers, including Howsley, set out on their own to find a hotel.

Even when the storms passed, there were no flights to Tulsa. Howsley and her roommate decided to fly into Dallas, where both had family.

Howsley was met at the airport by her daughter-in-law who drove her home.

And her two sons had already been at her house to retrieve her spare car key. They then drove to the Tulsa airport, picked up her car and drove it back to her home.

Even with the travel glitches at the end, Howsley said the junket is “definitely a trip I think anybody should take.”

In Howsley’s case, part of the cost was underwritten by her congregation.

“I know it will enhance my ministry,” she said, adding her denomination requires its ministers to complete 16 hours of continuing education every year.

It may not happen, but Howsley said she would love to make the trip again.

Harrison has another trip scheduled this fall and will take four groups back to Israel in 2023.