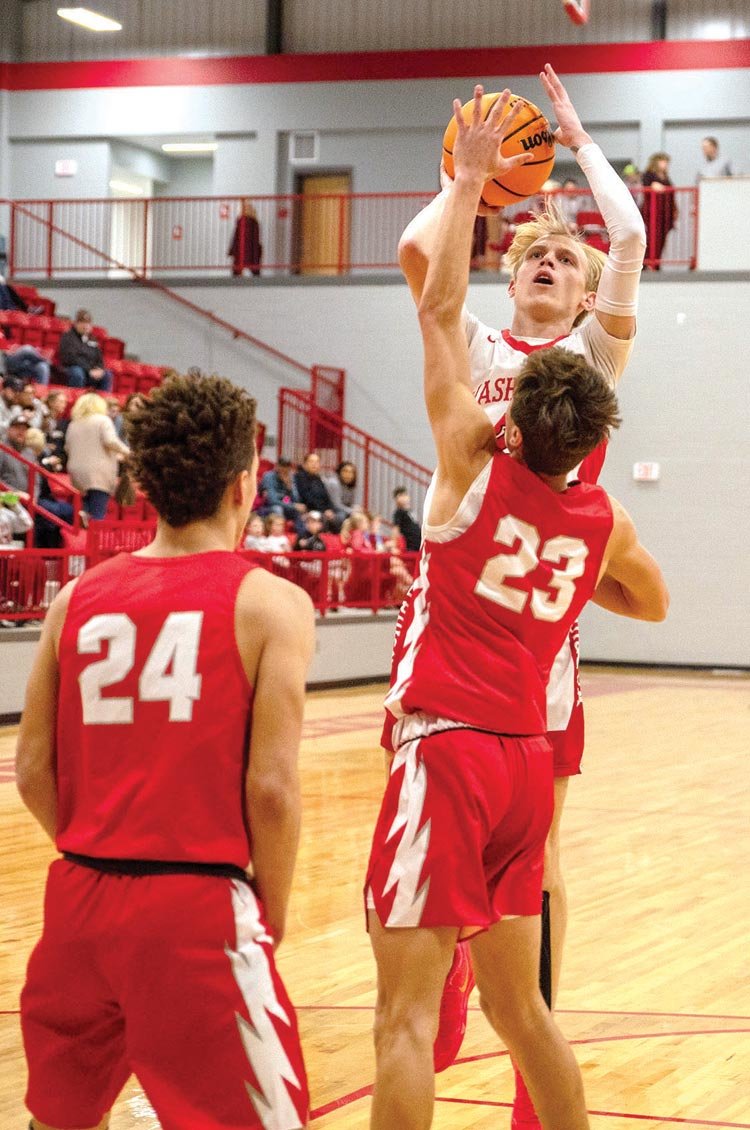 Luke Hendrix pulls up for a jumper during Washington’s 59-56 win over Purcell. Hendrix scored six points. 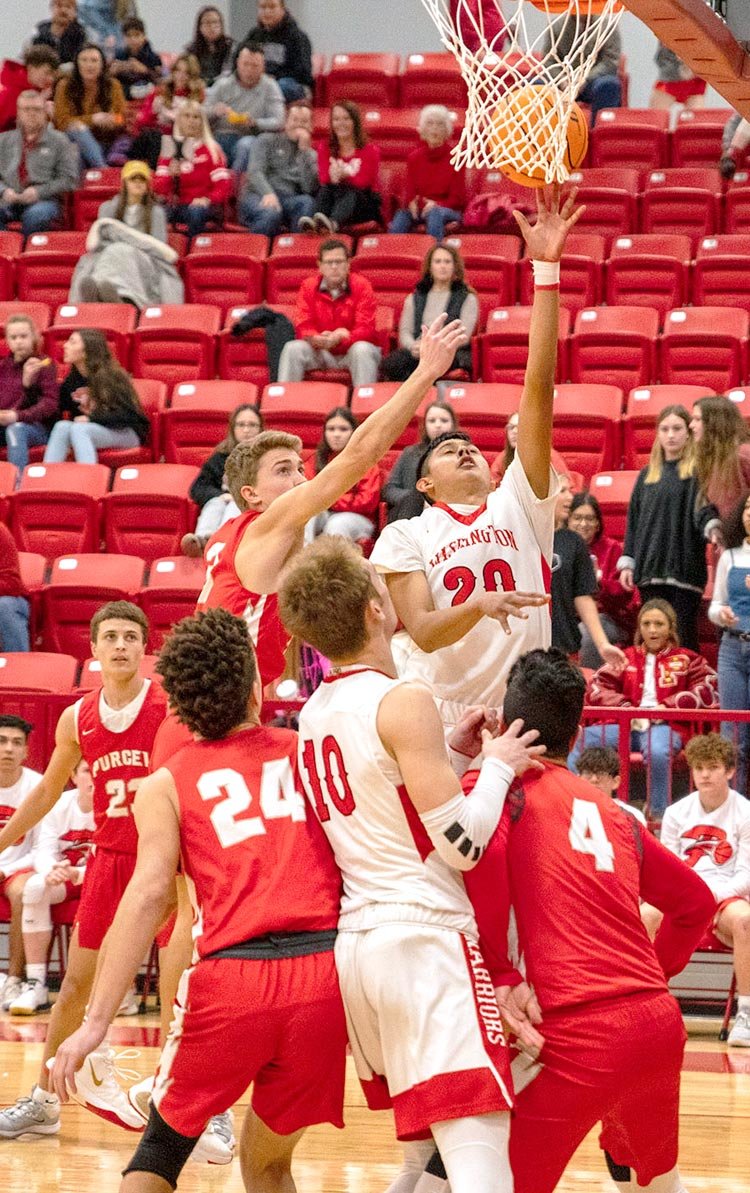 Hector Quinonez elevates for a layup during Washington’s 59-56 win over Purcell. Quinonez scored a team-high 19 points and made 5 three pointers. 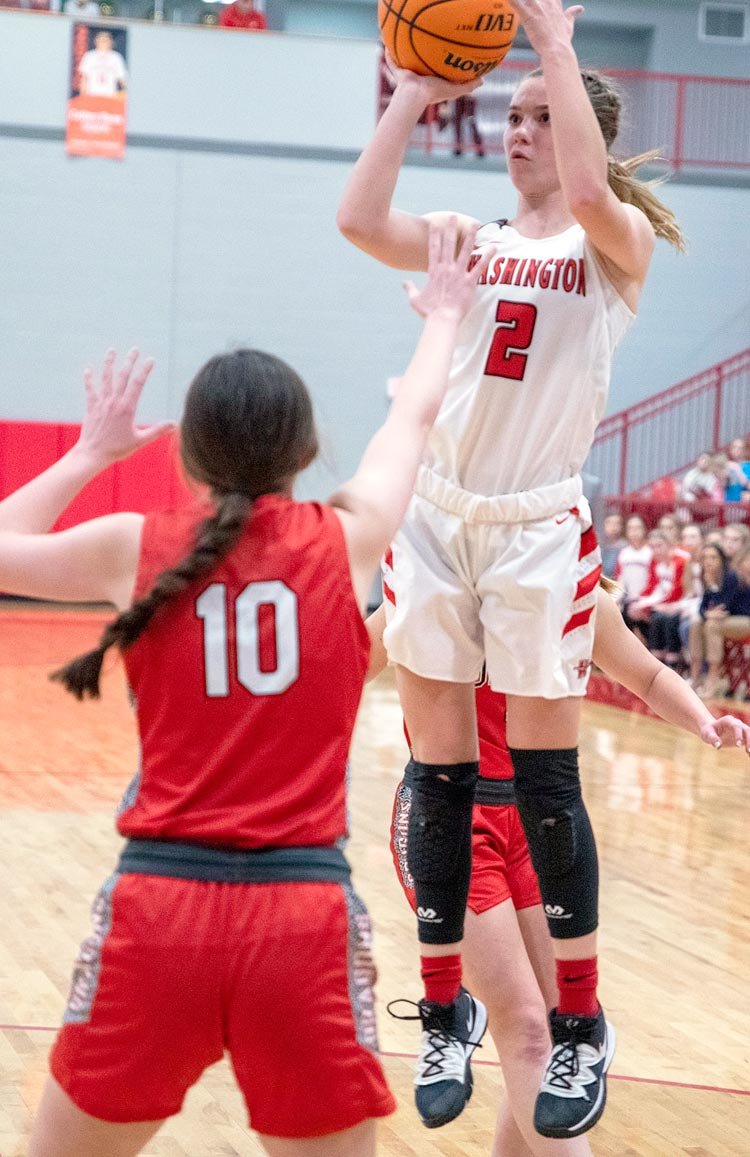 Tinley Lucas takes a shot during Washington’s 48-28 win over Purcell. Washington has an 8-9 record this season.

The Washington Warriors continue to improve and have found some rhythm as they enter the stretch of their 2019-2020 season.

“We have six games left in the regular schedule and will get back on track without playing tournaments,” said Washington Head Coach TJ Scholz. “We’ll get a normal routine and work on some stuff we haven’t shown in games. It will also be a chance for us to better our playoff seeding.”

Washington helped their own cause when they defeated Class 3A No. 15 Purcell 59-56 behind the sharp shooting of Hector Quinonez, who nailed five treys on the way to the victory.

“Hector shot the ball like we thought he could,” Scholz said. “We played good on defense and got some stops and had some breaks down the stretch.”

Cash Andrews scored 14 and Kobe Scott had 11 points in the win.

Later in the week the Warriors traveled to Little Axe for the Bobby Hicks Tournament.

“They were big and had a big guy who scored 17 and hurt us inside,” Scholz said.

Aden Hyde led the team in scoring, coming off the bench. The junior scored 15 points and was a perfect 5-5 from the free throw line.

“Aden has been playing as of late and has been earning some more minutes,” said Scholz.

Next up for the Warriors was Little Axe.

They dispatched the Indians 53-38.

Scott went off for a team-high 20 points in the contest.

Little Axe has a talented guard and the Warriors made it their mission to shut him down.

“He can shoot it from wherever so we tried to no-catch him,” Scholz said.

It took the Warrior offense a little while to get going, only scoring 17 points in the first half, but they went off for 36 after halftime.

They played McGuiness JV in the consolation championship and didn’t have their best outing.

The Warriors were careless with the basketball and it cost them on the offensive end of the floor.

“We had 26 turnovers and in a close game every possession matters,” Scholz said. “We didn’t value those.”

Washington was dominated on the glass and gave up 19 offensive rebounds.

“We didn’t hold block outs and McGuiness is a good team,” he said.

Scholz said his team will look at film and try to fix some of the turnover and blocking out issues.

We’ll concentrate on what we need to do,” he said. “We’ll work on things in a less stressful environment than a game.”