Warriors maturing after Beast of the East showing 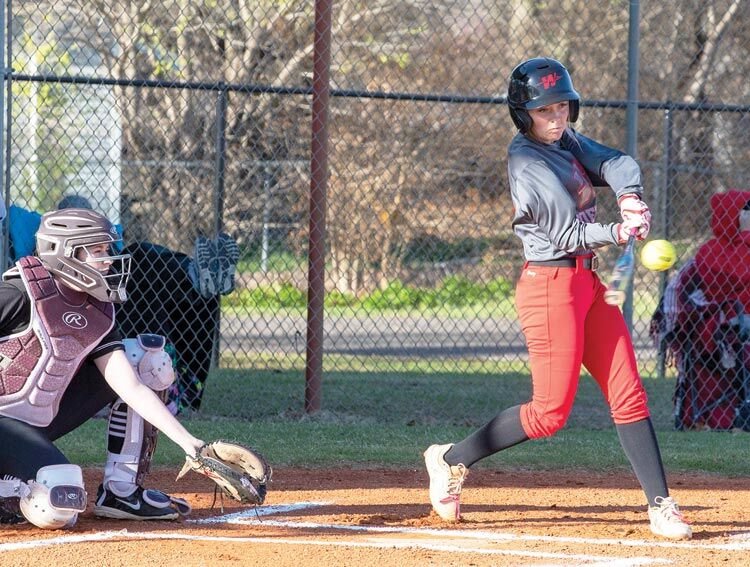 Washington junior Kaydence Andrews squares up a pitch during the Warriors’ 11-1 win over Blanchard. Washington travels to Weatherford for the Best of the West Tournament Thursday.

Washington won three of five games at the Beast of the East Tournament.

Their kryptonite was a very talented Latta team, which defeated the Warriors twice during the weekend.

“Latta was the other best team there,” said Washington head coach Jace Brewer. “They’re good and have tons of experience with juniors and seniors.”

“We hit it better against Kiowa than in any other game there,” Brewer said.

Latta clipped them 15-14 after a walk-off home run the next game.

“Three of our four losses are from walk-offs in the bottom of the seventh inning,” Brewer lamented. “But that’s slow pitch.”

Latta (4A No. 7) broke hearts in the final game of the tournament with another win on a 12-11 final.

“We had a chance to put up some runs in the second inning but popped up three times,” Brewer said. “We’re just a little inexperienced and commit crucial errors at crucial times. There is actual strategy to this game and we’ll be alright.”

Washington is putting together an impressive season at this point in the year with a dugout full of players who are somewhat new to the slow-pitch game.

“We have two seniors (Emma Curry and Kaile Kilmer) but after losing last year (due to Covid) some of the girls haven’t been around the game,” Brewer said.

Curry and Ellie Loveless currently lead the team in home runs with 10 each.

Maggie Place and Tinley Lucas are close behind with eight apiece.

Overall the Warrior bats are hot and Brewer is looking for his team to take the next step.

They’ll have a chance to take another step when they travel to Weatherford for the Best of the West Tournament.

“We’re going to be alright,” Brewer said. “We’ll be a hard out at the end of the season and no one will want to play us.”