Washington finished the Regional tournament with an unblemished record 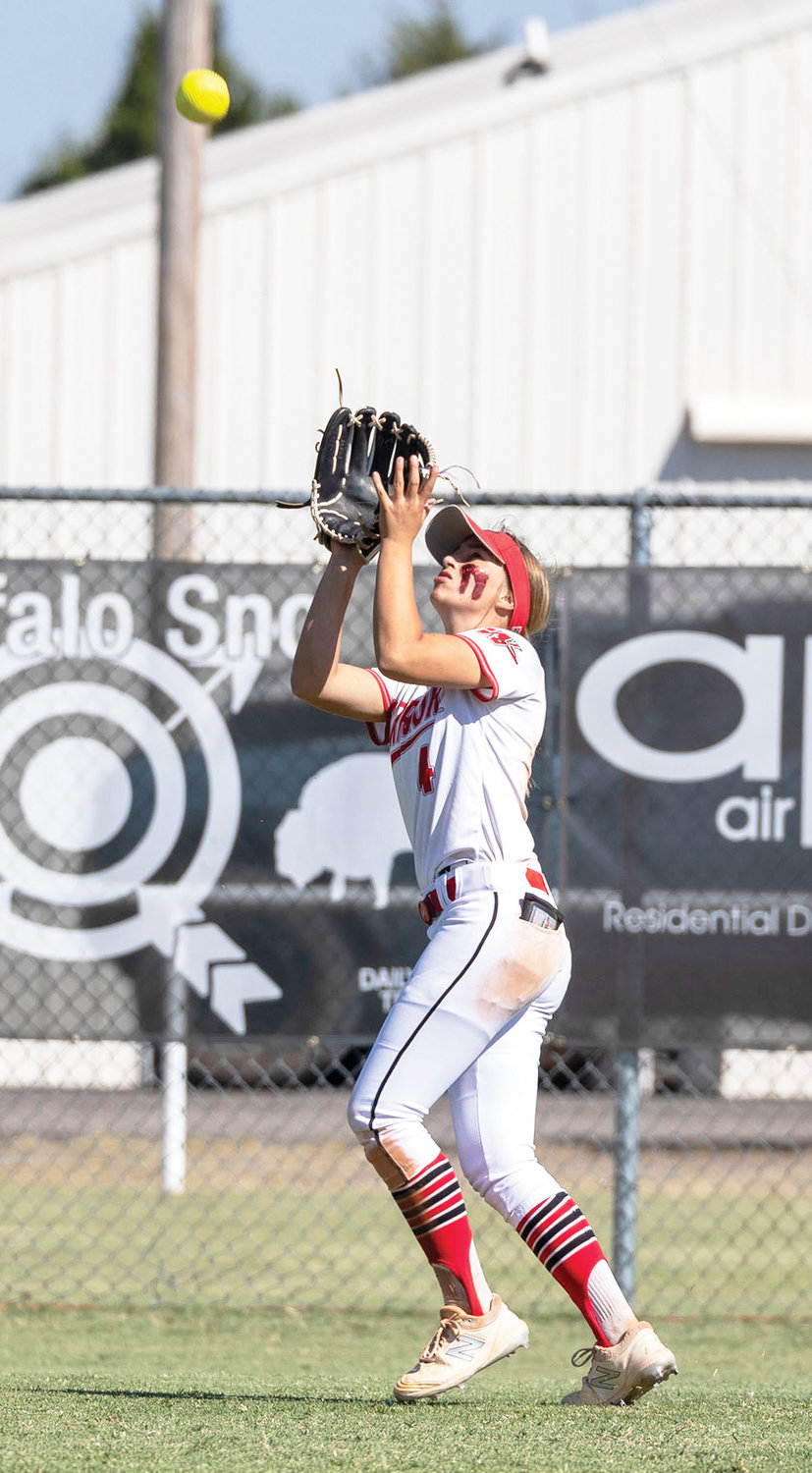 Washington senior Abby Wood settles under a fly ball during the Warriors’ 3-0 win over Purcell in the Regional tournament. The Warriors punched their ticket to the State tournament where they play Morris today (Thursday) at Hall Of Fame Stadium at 11 a.m.
Greg Gaston - double g images 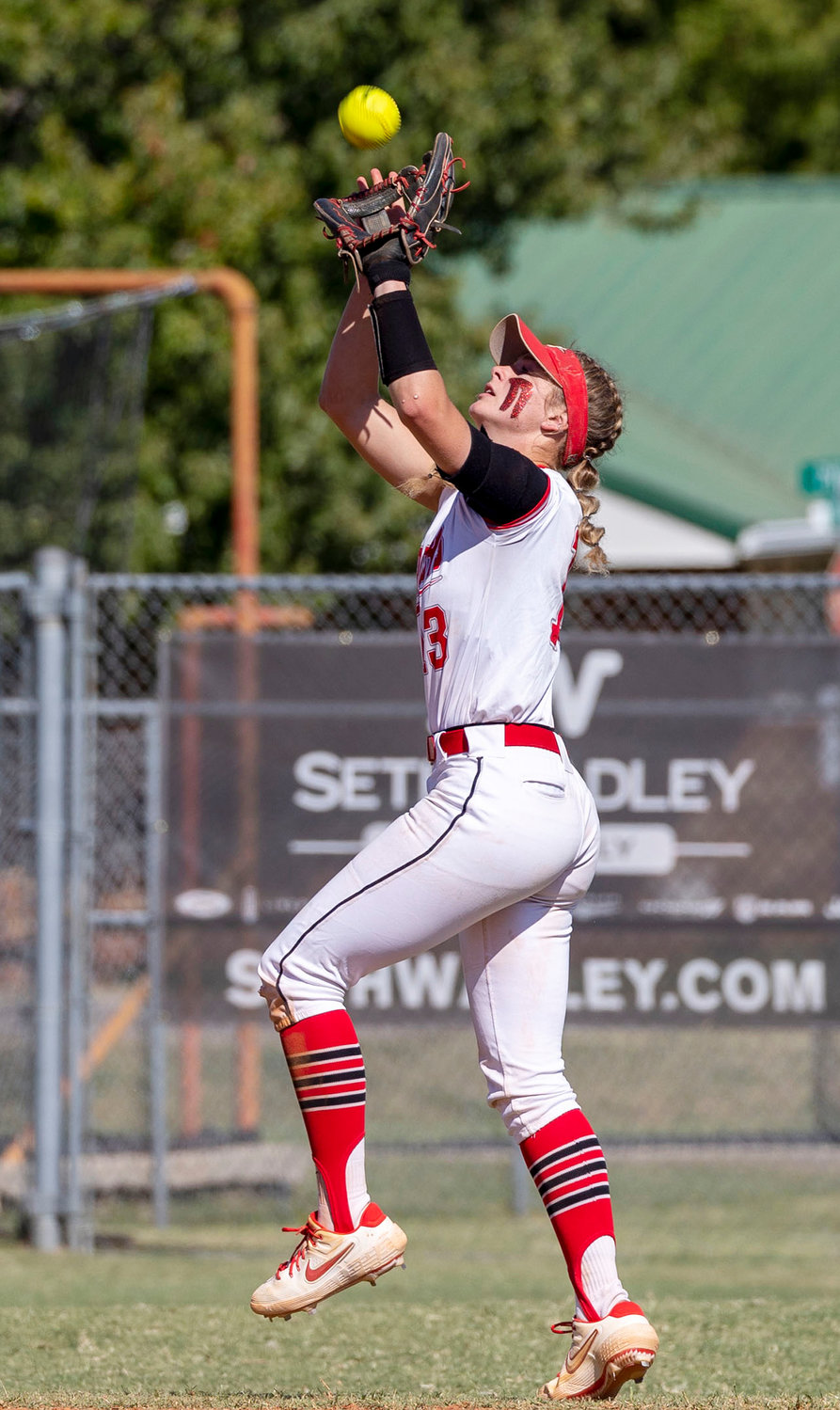 The Washington Warriors punched their ticket to State  after sweeping Kellyville (4-0), Alva (6-1) and Purcell (3-0) in the Regional softball tournament.

This makes 25 consecutive softball seasons, counting fast pitch and slow pitch, the Warriors have made it to the State tournament.

“There isn’t anything better than that record in Oklahoma,” Washington head coach Tylor Lampkin said. “When you do the things this program has done - it’s special. It shows what this softball community is all about.”

Sophomore Olivia Palumbo opened the tournament for the Warriors in the circle against Kellyville. She threw seven innings and allowed no runs with eight strikeouts.

“It was a good situation and we didn’t have to throw Maggie (Place) twice on the first day,” Lampkin said. “Ellie Loveless has pitched in those situations in the past but she’s so vital for our defense. She gets everyone where they’re supposed to be and gives us our best defense.”

Senior Abby Wood went 1-3 and knocked in two batters. She also stole a base.

Washington put three runs on the board in the second inning to effectively ice the game.

Loveless’ run in the fifth inning would conclude all scoring.

Lampkin gave senior Place the nod for the winners bracket game against Alva.

She struck out 17 batters and allowed no walks or earned runs in seven innings.

“She’s such a special kid,” Lampkin said. “She works on her craft daily and when she goes home she works on her spins. She has two or three pitches that she throws with command and it makes it hard on hitters.”

Washington scored one in the first inning and finished strong with two scored in the fourth and one more in each the fifth, sixth and seventh.

Wood was 3-5 with a pair of ribbies and scored twice.

Loveless was 2-4 and Tinley Lucas doubled.

Washington stayed with Place during their 3-0 win over the Dragons. She struck out seven batters.

Lucas and Wood were both 2-4 at the plate with both of Wood’s hits being doubles.

The game was scoreless until the fifth inning when Washington put three on the board.

Wood hit a line drive to center field that drove in Palumbo, who walked, to start the scoring.

Loveless knocked in Wood in the next at-bat.

The Warriors open the State tournament at Hall of Fame Stadium today (Thursday) at 11 a.m. against Morris.

Morris (34-9) has two of the best athletes in the state in their catcher and shortstop, according to Lampkin.

“They’re a very scrappy team,” he said. “They’re real aggressive on the base paths.”

“Getting to State is really the hard part,” he said. “We’re excited to get rolling. I hope our experience plays in big favor for us and we can relax and not get caught up in the moment. For the seniors it’s their 10th State softball tournament.”