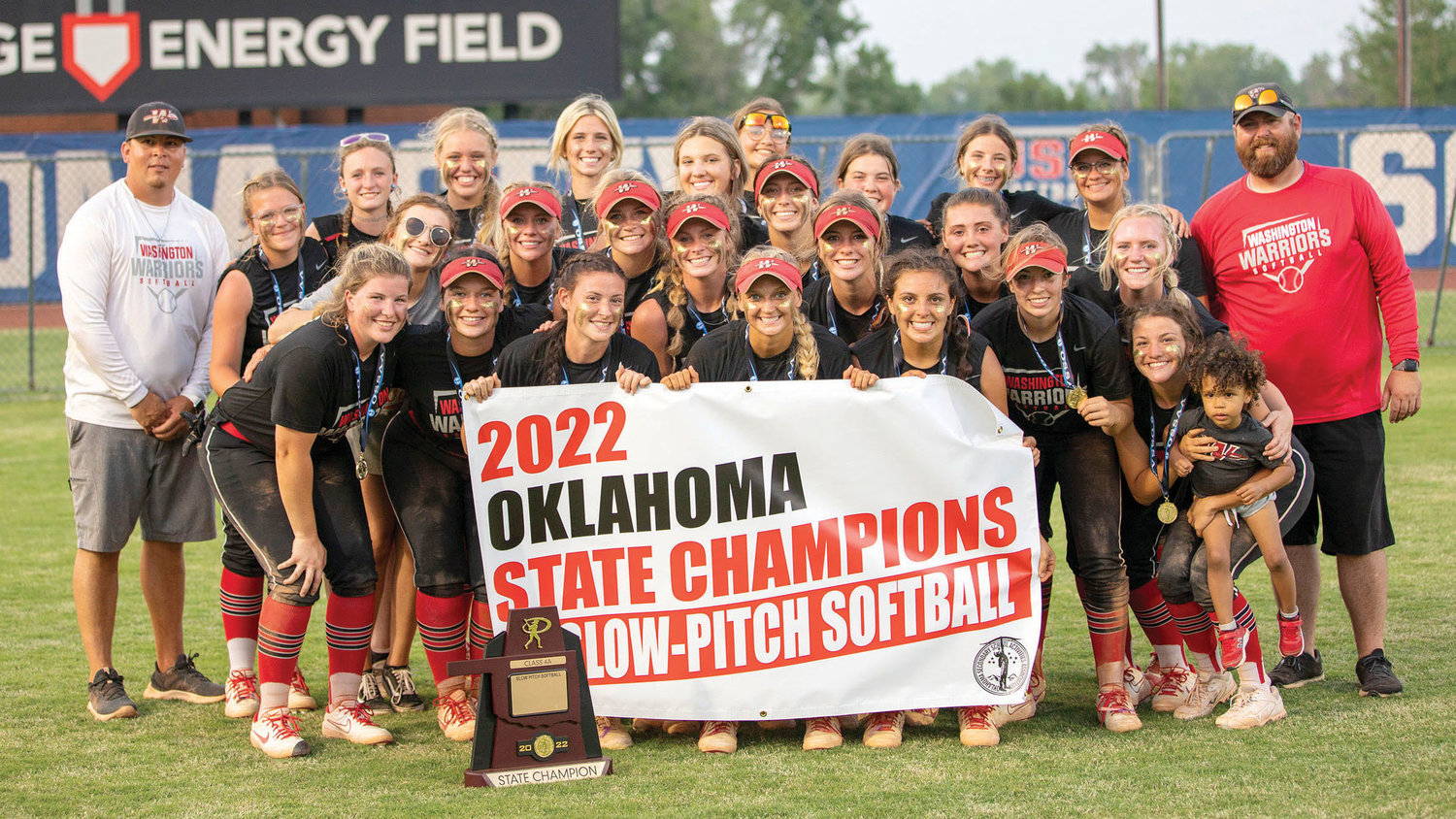 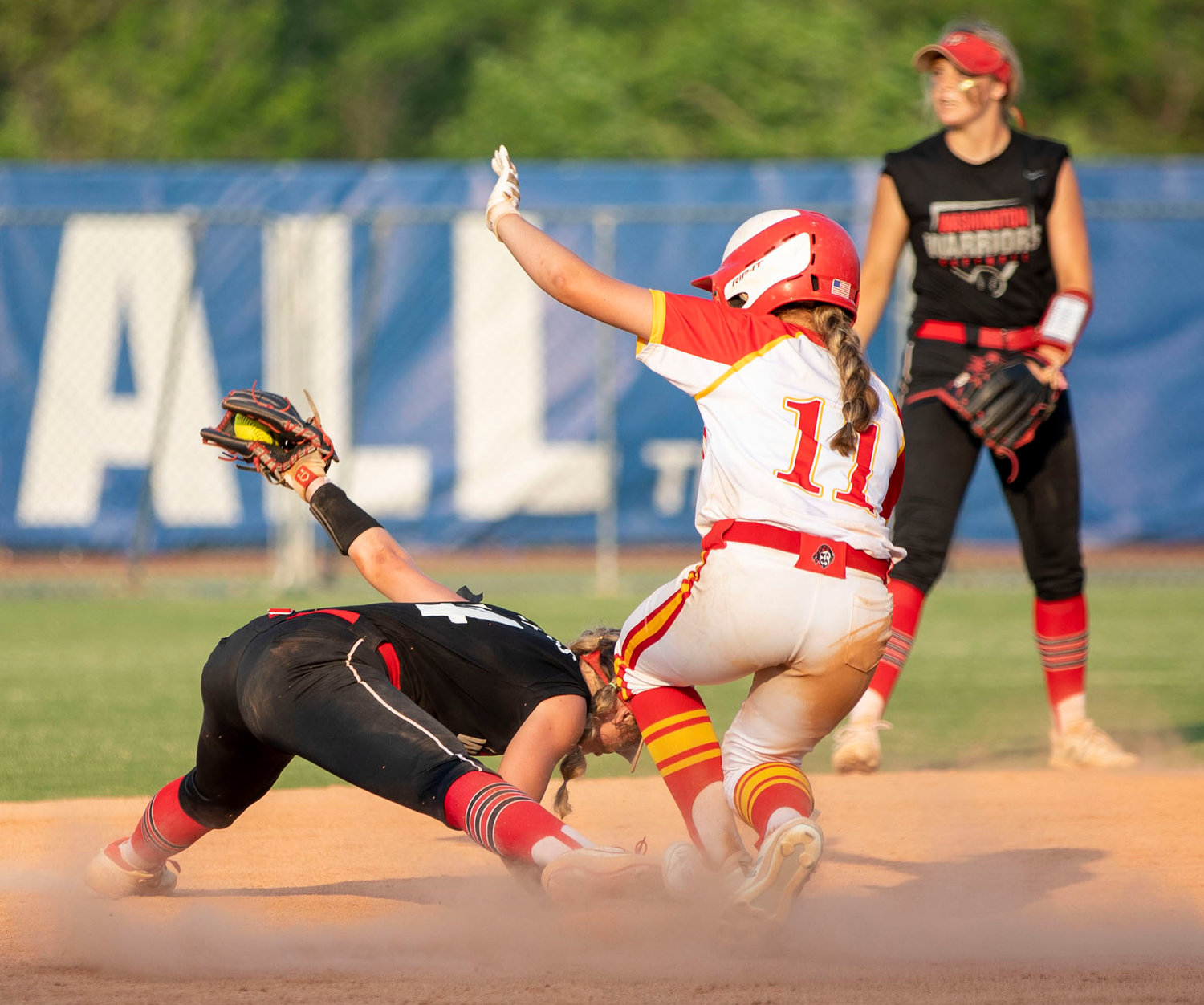 Washington junior Ellie Loveless stretches for every inch as she catches a ball at second base against Dale in the finals of the State tournament. Washington won 17-7.
Greg Gaston - double g images
Previous Next
Posted Thursday, May 12, 2022 9:00 am
John Denny Montgomery

The Washington Warriors won the Class 4A slow-pitch softball State championship when they defeated Dale 17-7 Monday.

With the win, the Warriors complete a softball slam and will house both the fast pitch and slow pitch championship trophies.

It’s the third time since 2014 the Warriors have held titles from both the spring and fall seasons.

Current Washington head coach Tylor Lampkin’s sister, Dagan, was a member of those teams and said this year’s team is right with them in terms of talent.

“These girls feel like they’ve put themselves in a position to be in the conversation of the best teams to play here,” Lampkin said. “At a program like Washington that’s all you can ask for.”

The road to the title for Tylor Lampkin’s Warriors team began with Howe in the opening round of the tournament at ASA Hall of Fame Stadium in Oklahoma City.

“I thought we got a good draw because I wasn’t sure Howe had the power to hang with us,” Lampkin said. “It was a good game to get us rolling.”

The long ball was the Warriors’ friend and they sent five out, courtesy of Elly Allison (2), Maggie Place (2) and Emjay Lucas.

The semifinal game against Silo – an 8-6 win – was a different story.

“Silo was a nail-biter,” Lampkin confirmed. “They’re pitcher did a really good job and gave us fits. They cut it to a one-run game late and we had to have some big defensive plays to help get us out of the game.”

After Washington scored one run in the top of the first inning neither team scored again until the Warriors put up a five spot in the fourth. Silo answered with two runs in the bottom half of the inning.

Washington added another run in the fifth but things got interesting when Silo scored four in the sixth to get within one.

Washington got another run for cushion in the seventh and held Silo scoreless the final inning.

“We just couldn’t get a timely hit to put it away and we had some nerves get to us a little bit,” Lampkin said.

Tinley Lucas was 4-4 with a couple RBIs and scored two runs herself. She homered and tripled in the game.

“Tinley struggled in the first game but I challenged her and told her as the three hole we had to have her,” Lampkin said. “She didn’t get out the rest of the day.”

Washington’s finals match-up against Dale was relaxing compared to the Silo game.

The Warriors scored two runs in both the first and second innings before blowing the lid off the game with a 10-run third.

Meantime, Dale could only muster one run - which came in the first.

“When we held them to zero runs in the second inning my confidence grew a lot,” Lampkin said. “I knew we could hold them again.”

Dale eventually scored six more runs but could never catch back up.

“Dale is such a good team,” Lampkin said. “It was not them doing things wrong, it was us doing it right. We were getting hard hits and taking extra bases.”

Allison went 4-4 with six ribbies and scored three runs. Two of her hits came via homer.

After the win the team is predictably elated.

“They’re just all on cloud nine,” Lampkin said. “To do it the way we did it was pretty special winning both (slow pitch and fast pitch). Not many teams can win it (a softball championship) and the fact you can do it in both is incredible.

“It felt like some of the competition this year was playing against Washington teams from the past. To now be in the same conversation as them is all you can ask for.”

The Warriors will graduate three seniors from the team, Isa Portillo, Mattie Richardson and Mikinzy Bost.

“This group of seniors meant a lot to this team,” Lampkin said. “Some of them had different roles and they didn’t get selfish. I think they’re the real reason we won this is because they put the team first.”

Washington finished the year with a 40-2 record.