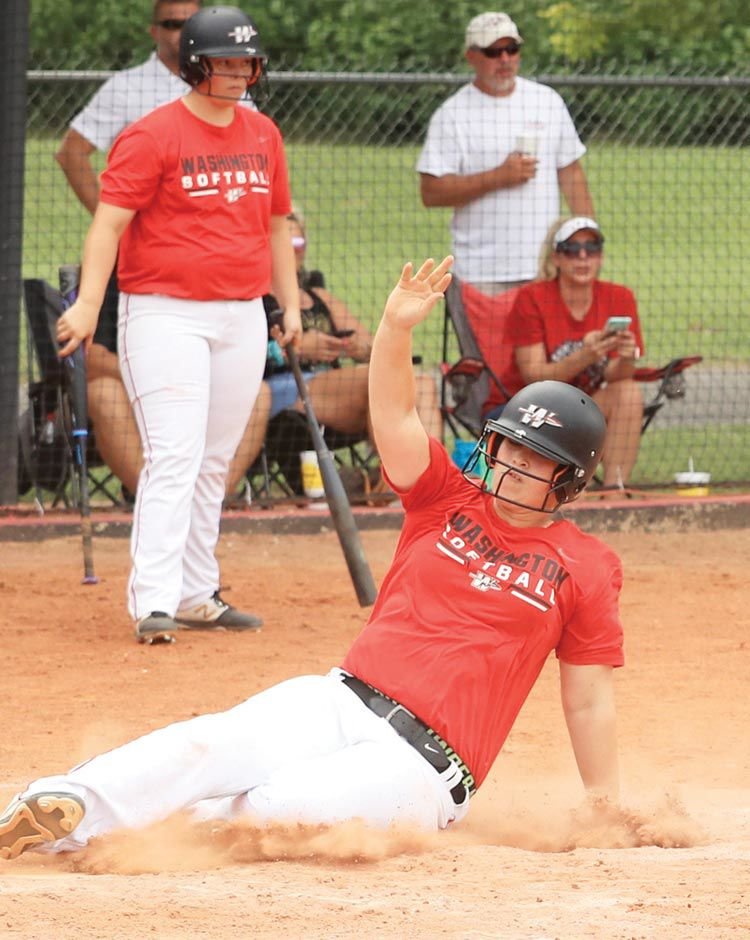 Hope Madden slides home safely for Washington during the Murray County Bash – which was played partially in Washington due to weather.

Hope Madden could very well be considered the Babe Ruth of the Washington softball program.

Madden hit for a monstrous .595 batting average during her slow-pitch career with the Warriors. The graduated senior also slammed 72 home runs and gathered 210 runs batted in.

All of those figures are Madden’s career statistics and all-time records for the Warriors. You can also add:  213 career hits, a 0.632 on-base percentage, and a slugging percentage of 1.450.

Yes, Madden is certainly the “Sultan of Swat” when it comes to the Washington Warriors softball program.

“It is pretty crazy to think I hit that well,” Madden said. “I’m just thankful I was able to play in a program like Washington. I was able to do the things I did with great teammates and great coaches supporting me. It was a blessing playing in that program.”

Brewer’s tutelage and mentorship for Madden was instrumental in her progress.

“He had such a big impact on my career in high school,” Madden said. “He was always so supportive of me and my career – both on the field and off the field. He was always one of those coaches you could count on to tell you the truth and lend a hand when you needed one. He really cared about players and made sure we were playing at our best potential. He was just an awesome coach to play for.”

Madden’s parents (mom Lacrecia and dad Daniel) are a big boost to her, too. She is going to attend Seminole State University, where she will major in elementary education with a focus on special education for the mentally challenged and handicapped.

“I’m planning on being a special education teacher for junior high,” Madden said. “I am also hoping to be able to coach. I was around several kids in high school who I admired for their attitude and their work ethic. I would like to help kids like them when I’m able to teach.”

Madden will be a teammate of Maebree Robertson, a 2020 Newcastle graduate. Madden thinks highly of Robertson, who helped Newcastle win a Class 4A State Championship last fall.

“I don’t know Maebree that well but I do know her,” Madden said Robertson. “Whenever I have been around her, she’s super nice and cool to be around. She’s a really great ballplayer! I can tell you that! I really like her and she’s going to be a really good teammate.”

The Warriors lost to Tishomingo, 1-0, in the fast-pitch Class 3A State title game last fall. Washington fell to Sequoyah-Tahlequah, 11-1, in 2018. Washington lost to Purcell, 6-5, in extra innings for in the 2017 slow-pitch state tourney.

Madden hit .390 with five home runs and 45 RBIs during her senior year in fast-pitch softball. She said her prowess at the plate is due to discipline – not chasing bad pitches.

“I needed to be selective at the plate,” Madden said. “Not helping the pitchers out was a big part of it. I needed to not stray from my pitch so I could do something every at-bat. I’m sure I got pitched around a lot this past year because I was the clean-up hitter.”

Jennie Finch from Arizona? Cat Osterman of Texas? Who is Madden’s player she looks up to?

“I really look up to Sydney Romero,” said Madden, who carried a 3.92 grade point average and was a member of NHS, FCA, STUCO, and the science club while at Washington.

Romero played for the Oklahoma Sooners, where she set numerous program records and led the Sooners to four consecutive Women’s College World Series appearances from 2016 to 2019. Romero and OU won the national championship in 2016 and 2017. She’s a two-time All-American.

“I love the way she carries herself,” Madden said of Romero. “She always played her hardest and she was always having a good time on the field. I think she is a great person off the field as well as one on the field. For me, that says a lot to me about someone. She’s a great player and a great athlete.”

Madden is happy yet sad to leave behind her successful days at Washington.

“It’s wild to think I had such success,” Madden added about her high school career. “It was just a lot of hard work and effort. I loved my time in high school and it’s crazy to think it’s over with. But, good things are hopefully in store.”