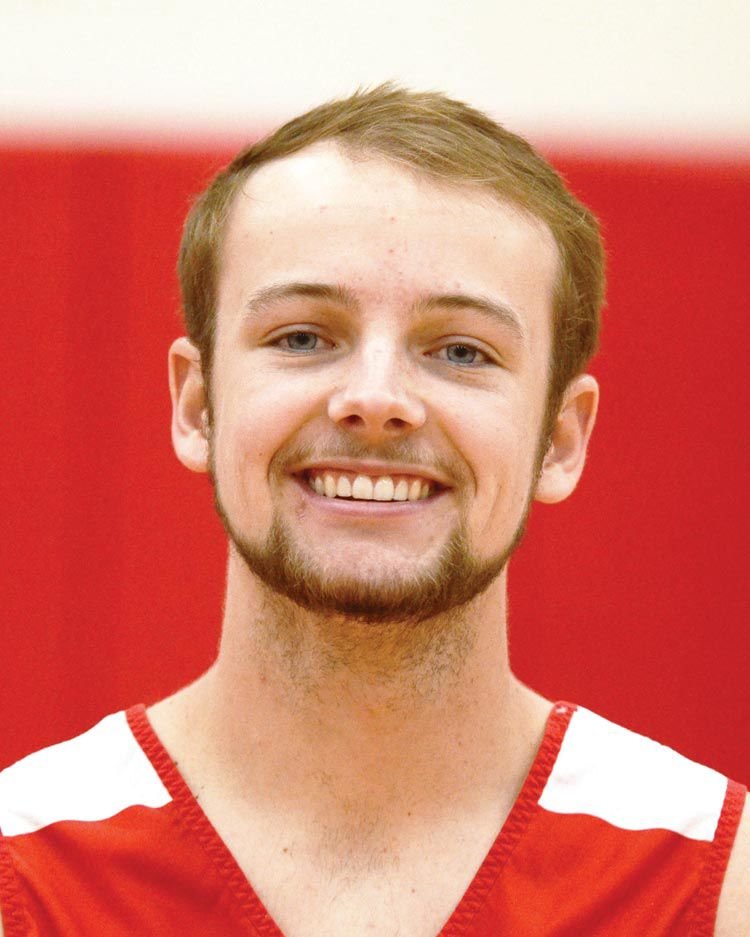 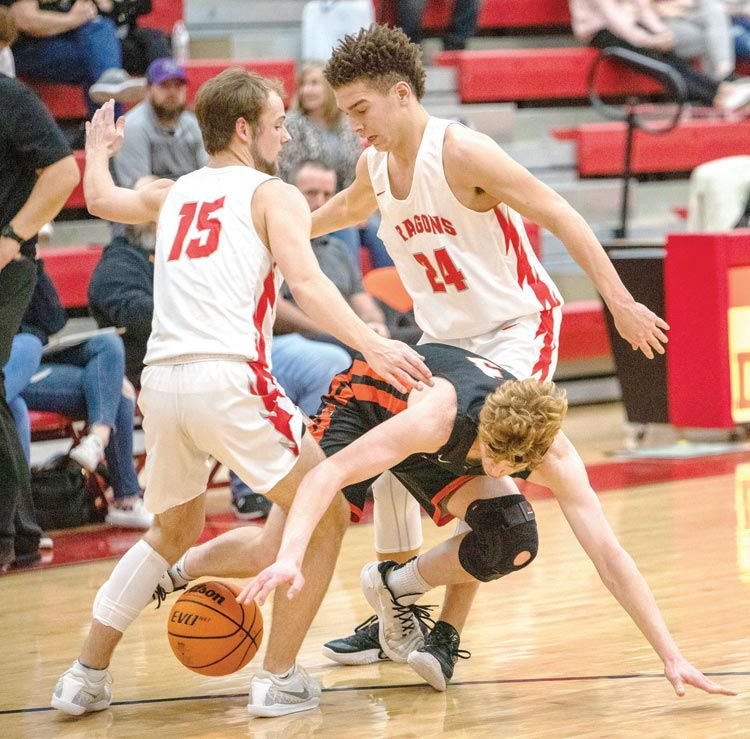 Defense like this by Grant Smith (15) and Nate Willis (24) in the District Tournament allowed Purcell to limit Lexington to seven second half points in a 63-23 Dragon victory last March.

Grant Smith of Purcell was one of the many seniors who graduated this year – with no fanfare. He wasn’t able to enjoy the final fruits of a successful high school career – a job well done.

There was no formal senior prom in May. There was no formal graduation ceremony. All of the things that he looked forward to in his final year of high school came crashing down after all Oklahoma public schools closed down in the spring due to the worldwide Coronavirus pandemic.

Yet, Smith has a good head on his shoulders and has a positive outlook. He hates that Covid-19 suddenly halted his spring endeavors.

But, through all of it, he remains his same, confident self.

“It was like a punch to the stomach for me,” Smith said. “When I was a younger kid, I’d watch all the seniors walk the halls in the spring with their heads up high, knowing that they were going to graduate with all the glory that goes with that. It was sad to know we weren’t going to be able to do any of those things. But, it’s okay. I know that we can make the world better – and we will.”

He wasn’t a superstar in any sport like his idols. Yet, his contributions were many and they were certainly felt by his teammates.

“In baseball, I just played hard,” Smith said. “I work hard in every sport I play. I wanted to do that to bring district championships and all of that back to Purcell. That’s what I worked hardest for was to give our town championships and stuff like that. Hard work is basically what I used to be successful.”

“We made a run for state in basketball my senior year,” Smith said. “We missed it by a couple of games. We had good basketball teams at Purcell and I’m proud I was a part of them.”

Smith also played baseball for the Dragons and was an integral part of their success. In the spring of 2018, Purcell went 15-11 under head coach Cole Sharp. Purcell lost to Oklahoma Christian, 11-1, in the district tournament.

“He didn’t come out for this season but it was cancelled anyway because of the pandemic,” Sharp said. “His sophomore year, he pitched a little for us and in his junior year, he played third base and did a good job for us pitching.

“In the middle of (Smith’s junior) year, he mainly just hit for us (as the designated hitter.) He’s a good kid and a coachable kid. He worked hard and he played hard. He’d have his ups and downs. He had some good plays and he would have some mistakes here and there at third base. His junior year was his first year really of playing varsity baseball because he was stuck behind a lot of seniors his sophomore year. He didn’t get to play a lot.”

Sharp was really proud of Smith’s contributions on the diamond.

“As a junior, he was one of our best hitters and he would DH for us,” Sharp said. “He did a good job hitting wise. He was just a good kid and he worked hard for us. He did whatever we asked of him. He’s got a great family and I’ve talked to his parents. They’re great people. Grant is a very academically smart guy, too. He’s just a great student athlete and we will miss him.”

Smith’s parents are Jennifer and Bill Smith. He also has a younger sister named Grace. During his high school days, Smith recorded a remarkable 3.98 grade point average. He was a member of honor society and made the Purcell superintendent’s honor roll all four years while at Purcell.

“Good kid,” said Purcell basketball coach Roger Raper said. “He was our enforcer. He was a guy who was just tenacious on defense. We always put him on our toughest opponent. He was the guy who would run through screens and guard the heck out of people. He did a super job of bringing that energy to the defensive end of the court for us.

“He wasn’t an offensive juggernaut by any means. But, he understood what his role was and that was to take care of the basketball on the offensive end and help get the ball to the people who were scoring for us. He put all of his focus on that and that is what we needed for the team this past season. He made himself into an incredibly valuable player for us.”

Raper went on to say he admired Smith for his efforts in the classroom. Smith plans on going to Oklahoma State University in the fall to major in construction engineering technology. He plans on being a project manager someday.

“For two years as a two-guard, he started for us and he played as a sophomore,” Raper said. “We were extremely pleased with what he brought to the team each and every day. We had a pretty good year last season at 21-6. We were conference champions. Grant Smith was a huge part of our successful year. He comes from a great family and he’s a great student. He took a lot of pride in his academics. He was there every day for our team and I couldn’t be happier for the kid.”

Smith played golf his senior year last fall. He finally came out for golf after having taken lessons from Purcell golf head coach Mike Gowens, who has been at the helm of the golf teams since 2004.

Gowens has been coach of seven girls’ state championship teams and three runner-ups at Purcell. He also has a state runner-up finish as the Purcell boys’ head coach in 2008.

“He really was a beginner,” said Gowens, who played football at Northwestern State University in Alva. “He really didn’t start playing seriously until he was a senior. He took some lessons from me when he was younger. At that time, he wanted to play baseball. But, his senior year, he wanted to give it chance. Now, I think he’s got the ‘bug’ pretty bad!”

Indeed, Smith is a late bloomer in golf. He plays all the time now. But, he agrees with Gowens.

“My senior year in golf I only played in one tournament,” he said, “and I was pretty rusty.”

Gowens said Smith could be a pretty good golfer in the future.

“He’s been playing quite a bit this summer with his family,” Gowens said. “He only played in one tournament for us. He’s pretty much brand new at the game. But, he’s got some promise and has the potential to become a really good player. He’s athletic and he’ll become a good golfer eventually. He just needs more time. Even when you’re a good athlete, you still have to put in the time.

Smith has nothing but the greatest superlatives for his three Purcell coaches.

“Coach Raper was really a mentor to me,” Smith said. “He taught me how to be consistent. He wanted everyone to work hard in practice so that we were prepared for the games. I try to incorporate what he taught me in terms of putting myself in the right place in life, not just on the court. Really, all of my coaches instilled that in me – preparation for life as well as in sports. They are all great and I will always be thankful to them for their help.”

In a suave gesture to acknowledge the Purcell graduates, the city put up a banner for each graduating senior this year on the light posts along the northern half of Green Avenue. That certainly makes Smith proud.

“It sure is awesome to drive down the road and see all of those banners for every one of us seniors,” Smith said. “It feels great to see them up on the light posts. They look great and I think this town is great. For sure, Purcell didn’t forget about us, I know.”