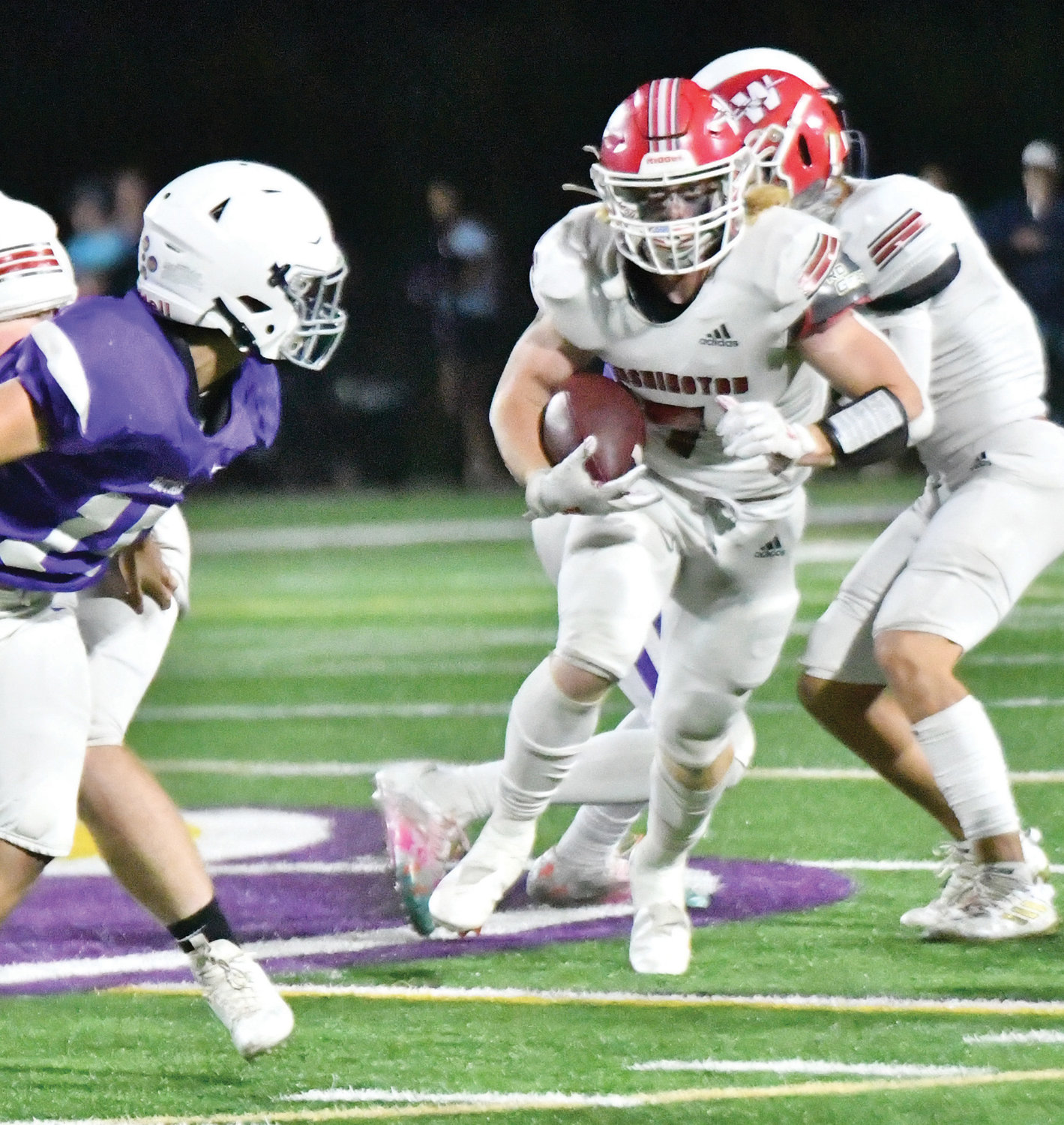 Washington senior Cole Scott runs through a wide-open hole during the Warriors’ 42-7 win over CCS. Scott rushed the pigskin 16 times for 93 yards and a 10-yard touchdown in the game.
Ron Ladlee 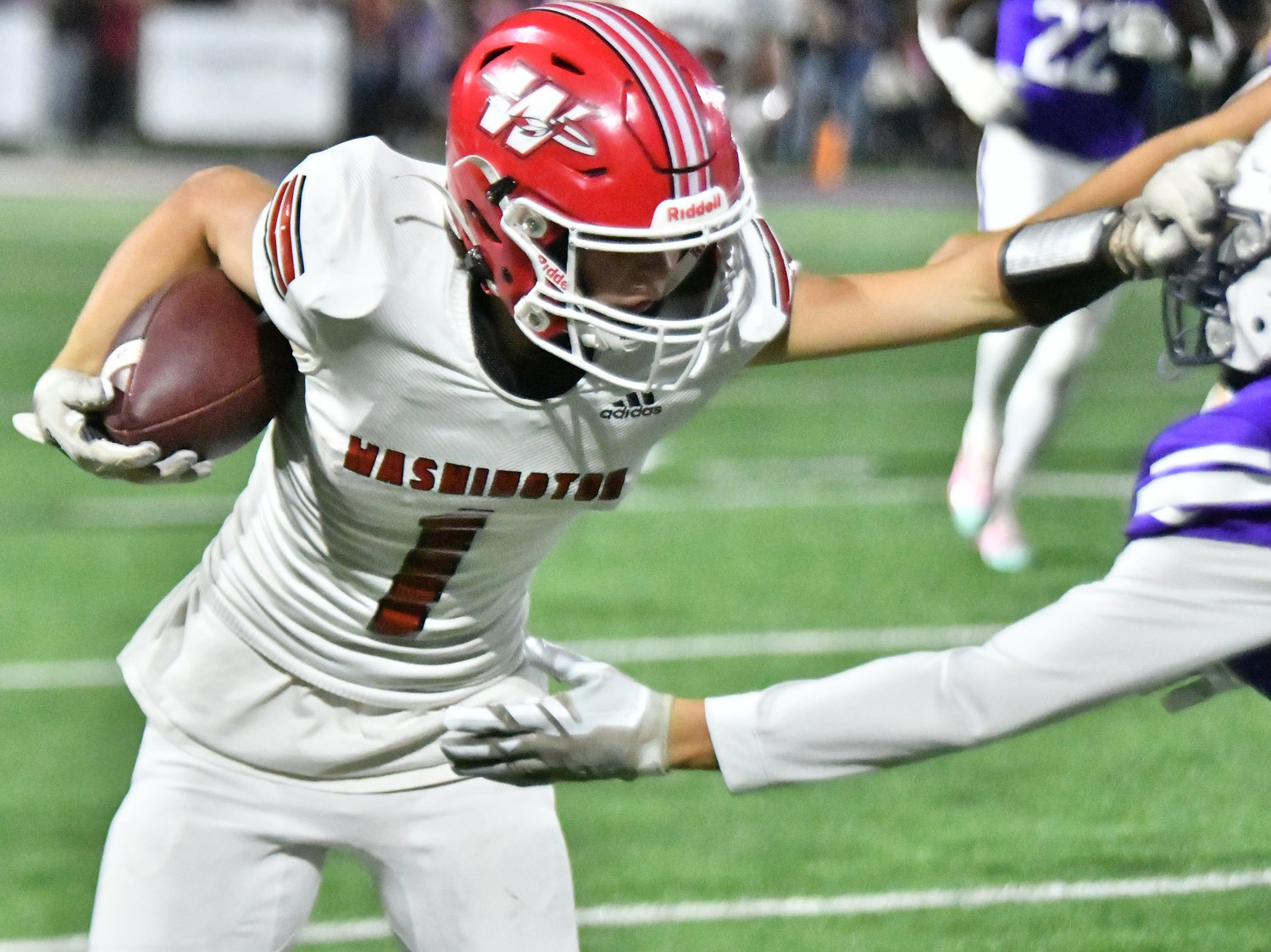 Washington sophomore Mason Singletary throws a stiff arm on a CCS defender during the Warriors’ 42-7 win over the Royals. Singletary caught a 60-yard touchdown pass in the second quarter. Washington will host the 1-4 Crooked Oak Ruf-Nex this Friday night at 7 p.m.
Ron Ladlee
Previous Next
Posted Thursday, October 6, 2022 9:00 am
John D. Montgomery

The senior signal caller completed 12 of his 18 pass attempts for 341 and the five scores.

“I’m sure he’d be the first one to tell you to credit his offensive line and give his receivers a lot of credit for yards after the catch,” head coach Brad Beller said.

The first touchdown pass of the night in the first period and the last one in the fourth quarter were both to Nate Roberts.

The first quarter score was a 68 yard play with the fourth quarter touchdown going for seven yards.

Hendrix connected with Cage Morris for a 19-yard score later in the first quarter and found Mason Singletary open for a 60-yard bomb in the second quarter. He hooked up with Mayson Thomas for a 28 yard score before halftime.

“He threw extremely well,” Beller said. “Of those passes, none were longer than 12 yards down field. He did a great job of getting the ball to our receivers in space and the receivers did a good job making yards after the catch.”

Beller said his offensive line was dominant but due to 13 penalties for 125 yards, the offensive rushing stats really didn’t show how well they ran the ball last week.

Cole Scott rushed the pigskin 16 times for 93 yards and a 10-yard touchdown.

“We dominated up front but those yellow flags took away from how well we were running the ball,” Beller said.

Mayson Thomas toed a 33 yard field goal as time expired in the first half.

For the second straight week it was another smothering night of defensive football for the Warriors.

“It was just a dominating performance by our defense,” Beller said. “CCS had 25 rushing attempts for 38 yards. The defense did a great job of being physical. We had a good pass rush that forced them into throwing two interceptions that were big stops in the second half.”

Junior Naithen Spaulding led the team with 10 tackles, five of those were behind the line of scrimmage. The aggressive defensive lineman also had one quarterback sack.

Ben Vaughn registered eight tackles including one for a loss. Jake Coles was right on his heels with seven stops while Cole Beller made five tackles.

“I’m proud we played as well as we did for as long as we did,” Beller said. “That’s two complete defensive games. The one the week before against Frederick and last week against CCS. They really stepped it up.”

Washington will host the 1-4 Crooked Oak Ruf-Nex this Friday night at 7 p.m.

The Ruf-Nex will operate out of the Wing T or Flex Bone on offense.

“They have improved significantly from what they were last year and are moving the football,” Beller said. “It may not be showing up in wins but they are moving the ball at times and trying to execute.”

“They like to bring pressure mixing it up both inside and outside,” Beller said. “Their coach, Farold Smith, is doing an excellent job.”

Washington Head Coach Brad Beller nominated Jaxon Hendrix as the Offensive Player of the Week for his 12 of 18 passing performance for 341 yards and five touchdowns.

Beller nominated Caleb Bruce as the Offensive Lineman of the Week. He graded out at 88 percent against the Royals.

Getting the nod as the Defensive Player of the Week was Ben Vaughn who had eight tackles including three for losses.

Naithen Spaulding was nominated as the Defensive Lineman of the Week. He registered 10 tackles with five of those behind the line of scrimmage. He also had one quarterback sack.