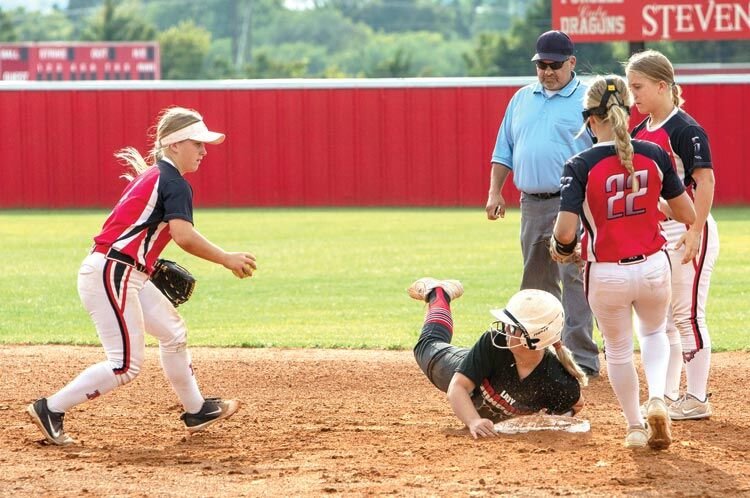 Kinley Croslin gets back to second base ahead of the tag during Purcell’s 2-1 win over Pauls Valley. 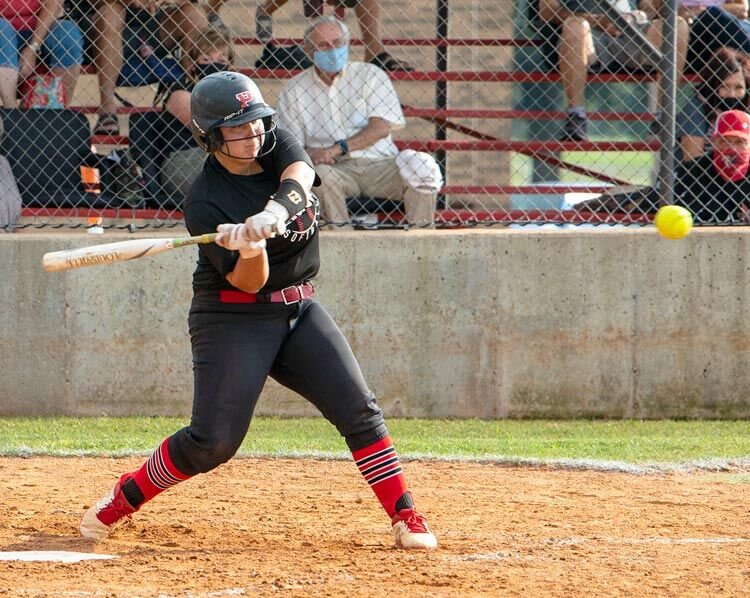 Hannah Buchanan zeros in on pitch during Purcell’s 2-1 win over Pauls Valley. Purcell is scheduled to play at Washington Friday and at Dale next Monday.

After a 12 day layoff due to quarantine Purcell’s Fast-pitch Dragons got back on the field last week and opened with a 2-1 victory over Pauls Valley.

KK Eck came up with a clutch double that scored both runs in the game.

Savanna Edwards, Kinley Croslin and Kyleigh Smedley also had hits in the contest.

“Our defense was solid and (Brook) Fleming did a great job in the circle,” head coach Sarah Jones said.

In the Comanche Festival Purcell lost to Marlow and Anadarko.

Marlow pinned a 7-5 loss on the Dragons in a game that was called due to time.

Purcell jumped out to a 5-love lead after scoring four in the second frame and adding another run in the bottom of the third.

But in the top of the sixth inning Marlow started hitting and finding holes.

“They came up with some big hits at the right time, we make a couple of errors and all of a sudden the game is tied,” Jones said.

Then a two run dinger gave the Outlaws the two run advantage.

“When it was our turn to hit we couldn’t get anything going and we were on a time limit so the game was called,” she said.

Hannah Buchanan was 3-3 including a double and she knocked in three base runners. Fleming also had a double. Lauren Holmes and Missy Nimsey also had hits.

“Our defense was solid and Fleming did great in the circle,” Jones said.

Anadarko edged the Dragons 9-8 despite two hits each from Croslin, Buchanan and Smedley. Karson Jennings and Nimsey also had hits.

Buchanan was 5-6 on the day, which was her best performance at the plate this season.

Purcell jumped out to a 5-0 lead in the top of the first but a walk-off home run spelled defeat for the Dragons.

“It was very similar to what happened in the Marlow game,” Jones said. “We jumped on them early and then got a little too complacent in the third, made an error and let them score to tie the game.”

Using the International Tie Breaker Purcell scored first in the top of the sixth but errors allowed them to tie the game back up and then came the home run.

In a district contest Monday at Bethel, Purcell out-slugged the Wildcats in an 11-10 victory.

The Dragons had 13 hits and Bethel stranded 10 base runners in the game. Purcell left eight runners on base.

“We hit really well at Bethel,” Jones confirmed. “Swings are finally coming around and we are hitting the ball, just right to people. We started stringing it together after they strung some hits together in the bottom of the fourth.

“We had some bad judgment plays on defense but we picked back up at the end of the game,” the coach said.

Purcell took an 11-6 lead into the bottom of the seventh.

“We were struggling a little bit in the circle and in one swing they cleared the bases to bring it to 11-10.

“Smedley made an amazing diving play in center to keep a runner at first and we won,” Jones said. “A win is a win and we needed it for districts. I was proud of the girls for not giving up but again we used the word complacent that needs to be put to bed.”

Buchanan was the sultan of swat spanking a 237 foot home run over the left field fence in the second to score Purcell’s first run.

Fleming and Holmes both had three hits and both drove in three runs.

Jennings had a pair of hits and an RBI while Eck, Nimsey, Smedley and Payci Constant all had singles.

Tuesday’s district contest with Tecumseh was rained out. Purcell is scheduled to host Latta in a non-district affair today (Thursday).

Purcell is scheduled to play at Washington Friday and at Dale next Monday.