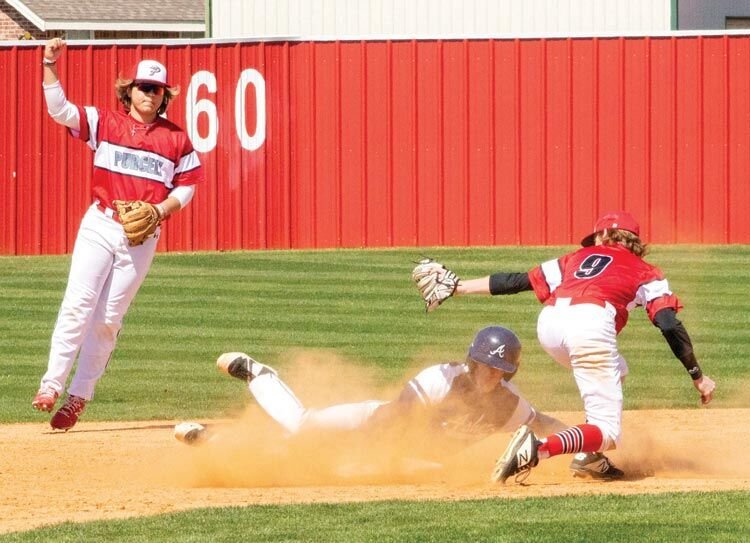 Purcell junior Hayden Harp makes the call while senior Cade Smith slaps a tag on an Asher base runner. The Dragons were defeated 14-6 by the Indians. 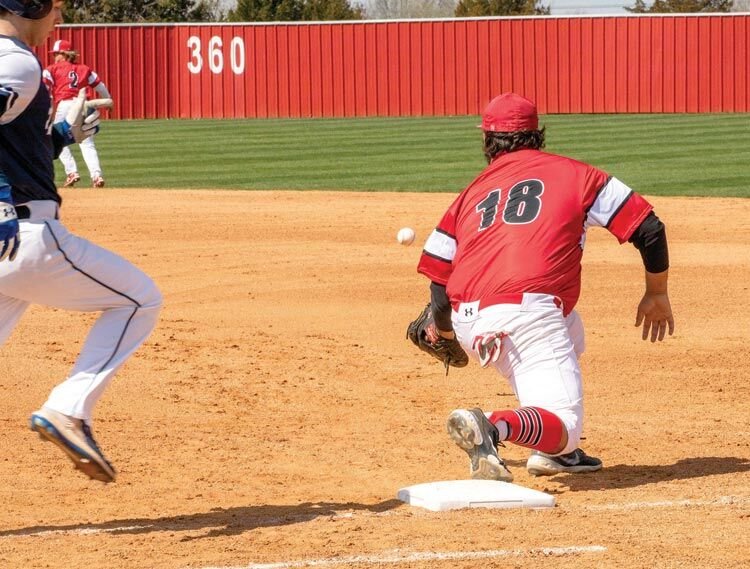 Purcell junior Brodrick Smith (18) stretches for a ball thrown by fellow junior Hayden Harp (2) against Asher. The Dragons were defeated 14-6.

McLoud won the first game, pinning a 7-3 loss on the Dragons. McLoud out-hit Purcell 12-9 in the game with Ryan Maynard taking the loss on the mound.

McLoud built a 6-zip lead before Purcell got on the board with a single run in the bottom of the fifth.

The Redskins led 7-1 going into the bottom of the seventh when Purcell ran out of steam after scoring twice in the frame.

Willis was the big gun for Purcell on offense going 4-4 including a double.

“I thought Ryan pitched pretty well for his first start,” head coach Cole Sharp said. “We just didn’t play very good defense and made too many mistakes in the field.”

Sharp’s troupe returned the favor in the nightcap, 6-4, riding the pitching arm of Dayton Smith while collecting 10 hits.

“I thought Dayton pitched really well for us. He competed on the mound all day,” Sharp said. “Overall, everyone hit the ball well. We needed that because it was a district game and each district game is very important in the seeding at the end of the year.”

Dayton Smith helped his own cause going yard in the fifth in a 1-3 performance at the plate. Ryan Maynard also hit a home run in the game. His long ball flew over the fence in the sixth inning.

Nate Willis, Creed Smith and Jorge Munoz all went 2-4. Creed tripled in the victory and collected a pair of RBIs.

Also slapping singles in the game were Cade Smith, who had an RBI and Brodrick Smith.

Purcell led 1-0 after their half of the second inning.

Purcell took the lead for good pushing across three runs in the top of the fifth and added insurance runs in their half of both the sixth and seventh innings.

Sharp called it, one of the best games he’s seen since he’s been at Purcell.

The Dragons were limited to four hits including a double by Maynard and singles by Brodrick Smith, Hayden Harp and Zach Idlett.

Brodrick had three RBIs in the game while Harp had one and Creed Smith had one.

Idlett took the loss on the mound for the Dragons.

“We made too many mistakes again and you do that to a good team like Asher and they will make you pay,” the coach said. “We just have to keep fighting through the adversity and keep competing each game and everything will line up for us in the end.”

Purcell was 4-4 heading into the Harrah games.