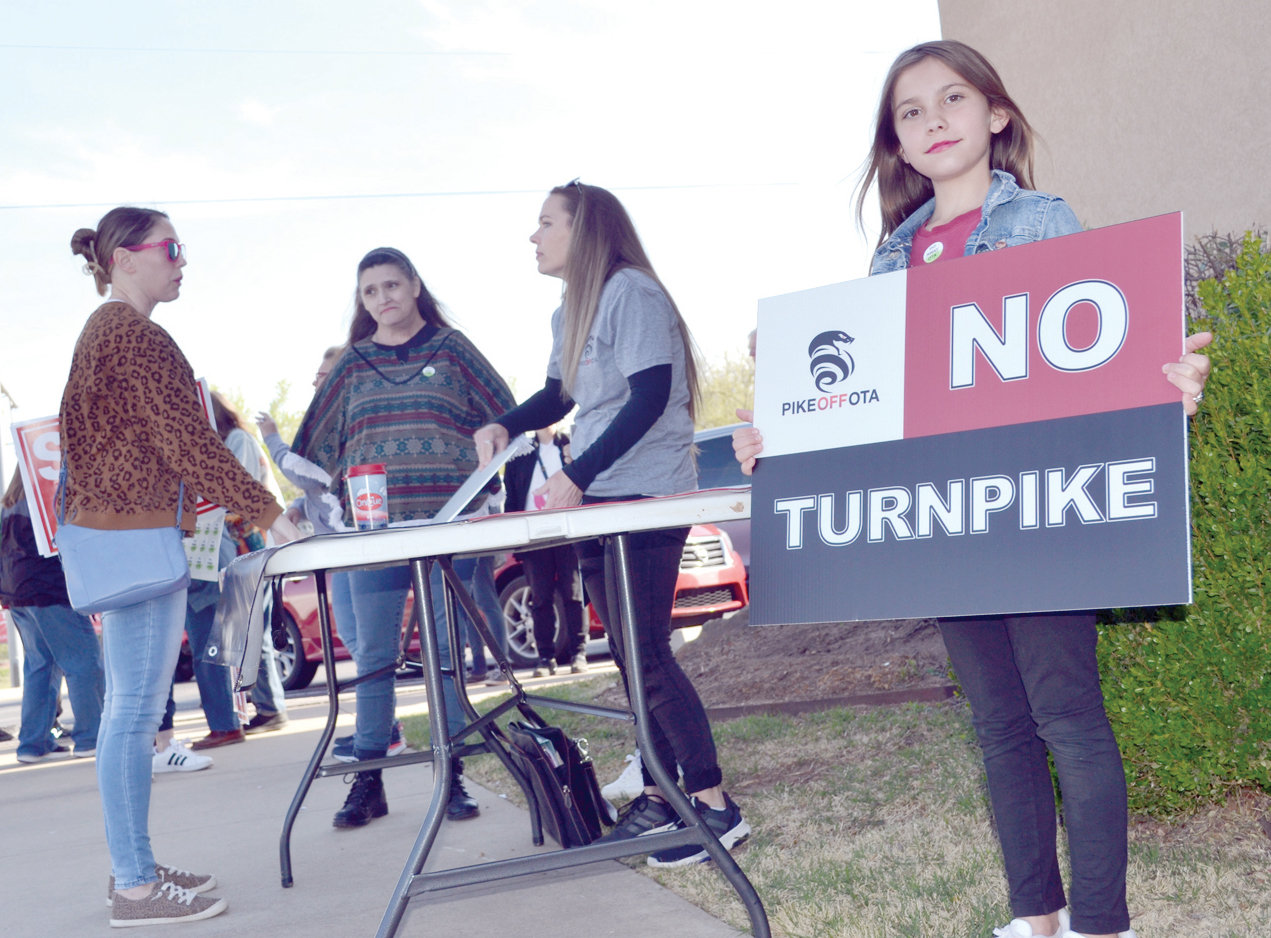 Ashlynn Duffey of Norman stands in front of Newcastle Public Schools’ administration building Monday evening, and in front of her mother, Mindy, and her sister (next to Mom), Jaidyn, with a Pike Off OTA sign, just before a meeting of the Turnpike Authority with Newcastle residents.
Mark Codner
Posted Thursday, April 21, 2022 9:00 am
Mark Codner

A meeting of the public and the Oklahoma Turnpike Authority at Newcastle Monday night was, for the most part, informational and communicative for those attending.

There also were organizers from the non-profit group Pike Off OTA, of Norman, in attendance voicing their concerns.

While OTA administration touted the turnpikes as reliever routes which will take traffic from congestion on U.S. Interstates 35 and 44 and provide better safety for the traveling public, members of Pike Off OTA said they are concerned with their children’s health and other environmental concerns such as water including the Lake Thunderbird watershed along the proposed routes.

The Newcastle meeting was planned mainly to discuss two routes, the Outer Loop: East-West Connector from Newcastle to Norman and then to the Kickapoo Turnpike, which would provide a second bridge across the South Canadian River, and the reliever route from the John Kilpatrick Turnpike southwest of the Will Rogers Airport.

OTA Deputy Director Joe Echelle, when addressing those in attendance, said there was a need to talk about traffic. He said I-35 around W. Indian Hills Road is around 100,000 vehicles per day now. He said I-35 from Purcell to U.S. Interstate 40 has five accidents every day.

“Anytime you talk about this with people who live in Moore, Norman, Purcell, Goldsby, Newcastle — everybody knows someone who has been in an accident on I-35 or I-44,” Echelle said. “We’re trying to provide some type of relief for some of that traffic so if there is an accident, there is another route to take and not just a local street.”

Echelle said the route proposed for the southwest side of Will Rogers Airport is to connect and relieve traffic which is currently on I-44 and is trying to go through the interchange which includes I-240, 59th Street, and State Highway 152.

Concerning Newcastle, Echelle said, “There are 50,000 cars per day that cross the bridge, and there are a lot of accidents.”

Echelle said OTA is still seeking comments from the public, but the east-to-west leg, the section between I-44 and I-35 which starts at Tri-City, is OTA’s top priority.

He said they are working to establish where the bridge would be built.

They are determining where the road will go. Right-of-way work would begin later this year and then construction in a couple of years. All this, he said, is contingent upon the sale of bonds that would fund this and other turnpike projects.

As the initial comments from OTA officials were completed, they announced that those in attendance could move to the tables that were set up. Approximately 120 people moved to the tables where they were able to study maps and talk with OTA right-of-way specialists, engineers, and environmental specialists. Most of those attending were property owners who were seeking more information on the alignment and the OTA process.

John Camara, of Newcastle, said he was concerned of the businesses that would be lost to building the area route, as well as the loss of revenue to the City.

Xtreme Outdoor Equipment owner Darrin Abel, whose business is located in the area where the current alignment is shown, said he has a prime location where there are now 50,000 cars per day going by. If his property is purchased by OTA for the turnpike he is concerned not only about receiving fair market value for the property and its potential, but also his ability to purchase new property with the same potential.

Norman resident Rebecca Rigsby said she and her children, who were working a table in front of the meetings’ entrance for Pike Off OTA, were in attendance to stop OTA from building any turnpikes.

She said building the turnpike from the Kickapoo to Norman would forever change the environment around Lake Thunderbird and the impact is too great to warrant the turnpike’s construction.

Rigsby said, “The current alignment crosses 41 tributaries to Thunderbird, not to mention the impact to private wells. Water is our number one concern, as well as the impact to our children and the concerns with their health.”

Echelle said all Access Oklahoma projects are contingent upon the following factors: how fast a project can be ready, how fast right-of-way can be acquired, how fast OTA can get into the bond market. Money and the sell of bonds will be critical.

As the new sections are opened, they will add new revenue to the program, a 15-year $5 billion program as it is planned today. Echelle said these could add additional projects in the future.

He also outlined OTA priorities from first to fifth. Their first priority is to connect from Tri-City over to I-35 at Indian Hills Road.