Lexington off to 0-3 start 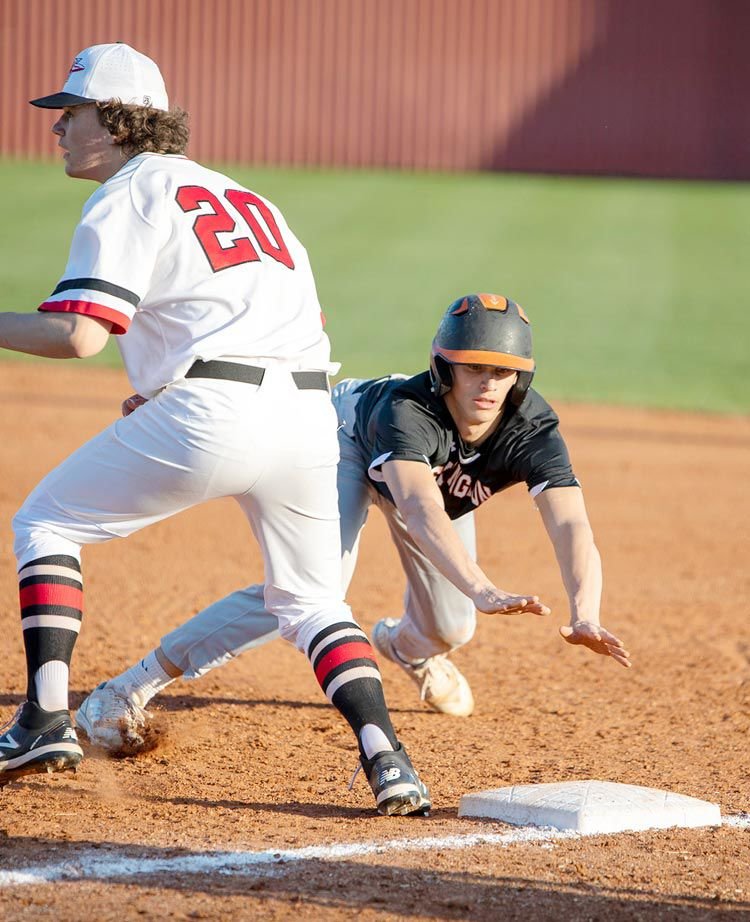 Jaylen Cottrell dives back safely to the base during Lexington’s game against Washington while Colin Pelton covers the bag. Washington won the game 13-3.

The Bulldogs opened the 2020 season going winless last week with two season-opening losses to Washington, 19-4 and 13-3, and another defeat at the hands of Bridge Creek, 13-12, in eight innings.

The ‘Dawgs lost to the Warriors at home in the season opener last Monday. Kolby King had two hits and an RBI against Washington while Mayson Dunaway had a big hit for the ‘Dawgs in the game.

King also had a hit in the second contest the next day against Washington. Toby Madden and Wyatt Webb also had nice hits for Lexington against the Warriors.

“We opened with Washington the first two games and they weren’t pretty for us,” Ennis said. “They’re a good team, no doubt. We faced a really good pitcher in Nick Andrews who has already committed to The University of Oklahoma.

“He might be the best pitcher we’ll see all year. We certainly struggled against him and then we had some troubles defensively. Washington hit the ball well, too. They’re just really good.”

The next day, it seemed like the same thing on the score sheet. Ennis said it was different, though, for someone who was watching the contest.

“In the second game at Washington’s field, the score wasn’t indicative of how the game really went,” Ennis said. “It was 5-3, Washington, going into the bottom of the sixth inning. We were putting the ball in play and Toby Madden pitched a great game for us.

“In the bottom of the sixth, the Warriors got things figured out. They’re a good team and got some great hits. The game ended up being not as close as it should have been.”

Lexington’s last game against Bridge Creek would leave a bad taste in anybody’s mouth. The ‘Dawgs were getting ready to lose again but then came back – big time.

“Bridge Creek was a heartbreaker for us,” Ennis said. “It was an emotional roller coaster. We had some defensive errors early. We had some ‘hits’ that didn’t get through. In the bottom of the sixth, we were 90-feet away from getting run-ruled. With just one out, we found ourselves out of the inning, though.

“In the top of the seventh, we ended up scoring seven runs to tie the game. It was just an emotional thing for us. From being so close to being run-ruled to coming back to tie the game, it’s just emotional. We scored twice in the top of the eighth to take the lead. We just didn’t make it work out. We had our opportunities and I hope we learned from this game.”

Coby Bear had a bases-loaded double which knocked in three runs for Lexington. Colton Penner had four hits and an RBI for the ‘Dawgs against Bridge Creek. Dunaway came through at the plate with three hits and an RBI against the Bobcats.

“We put the ball in play much better against Bridge Creek and our guys are enthused,” Ennis said. “Things are looking better and it’s early in the season. I’m not panicking or anything. We’re looking like a baseball team that can win some big games.

“But, I’m very concerned, for sure, about our season being cancelled. Right now, everything is as scheduled. But, I don’t have words to describe how I would feel if I had senior kids on the team and they had their season taken away from them – not just my own guys but any kids in the state of Oklahoma.

“It would be devastating. I don’t know how I would tell my players that the season is cancelled. Hopefully, I won’t have to.”

The Oklahoma State Board of Education has cancelled school and extracurricular activities until at least April 6.

Little Axe is scheduled to play at Lexington that day.