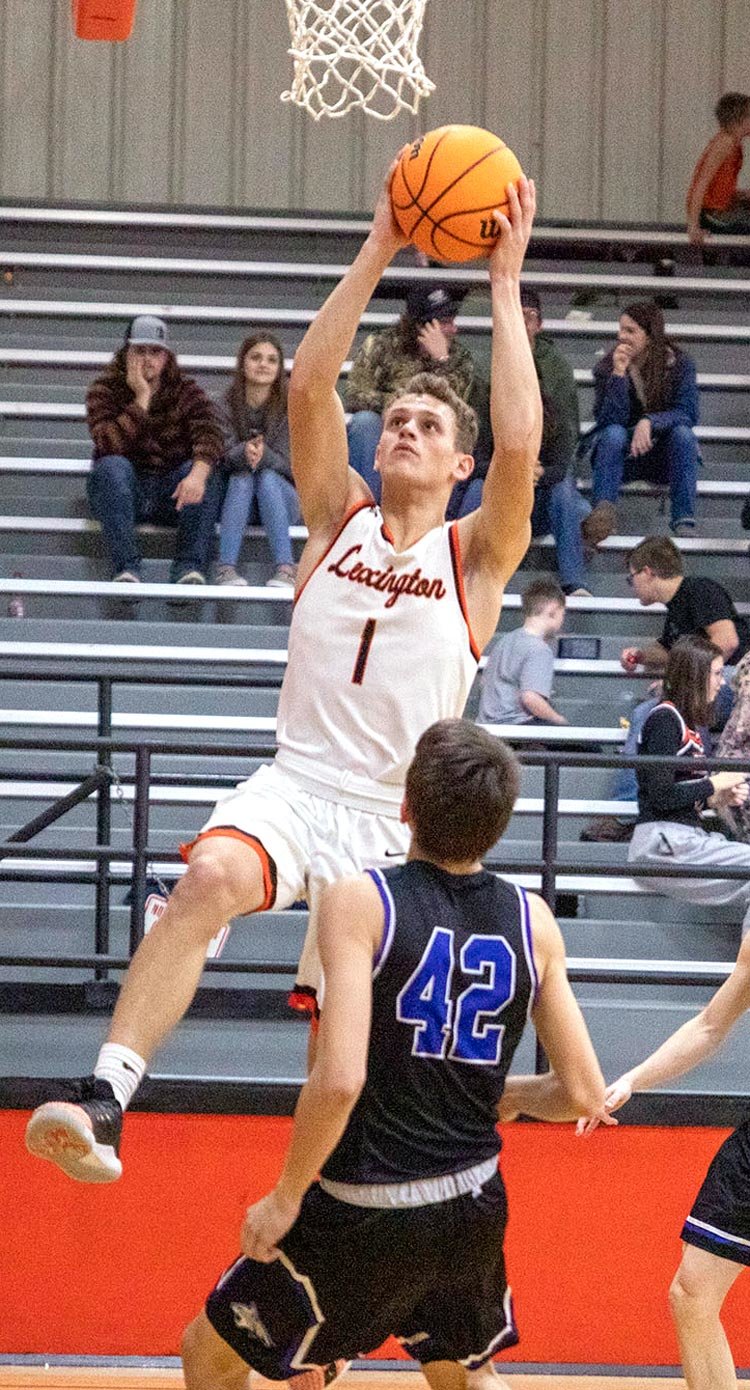 Jaylen Cottrell elevates over the Bridge Creek defense during Lexington’s 53-39 win over the Bobcats last Thursday. Cottrell finished the night with 13 points 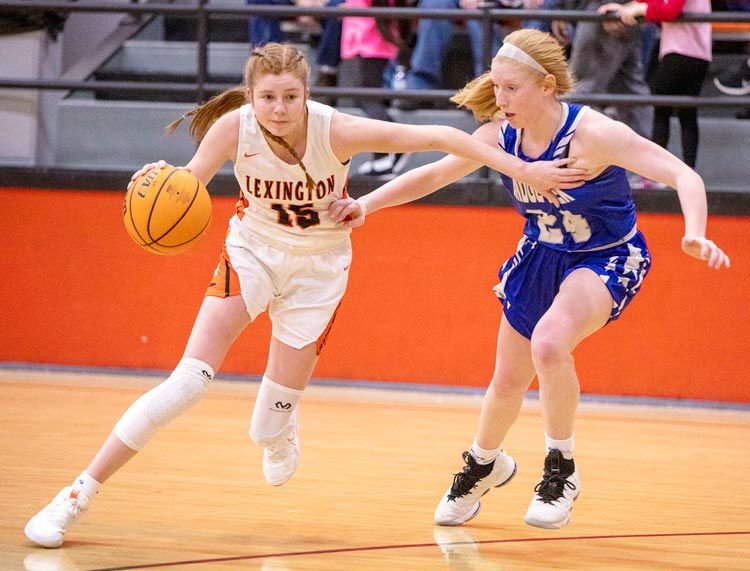 Lauren Beason drives past a Bridge Creek defender during their 70-50 win over the Bobcats last Thursday. Beason scored 17 points in the win. 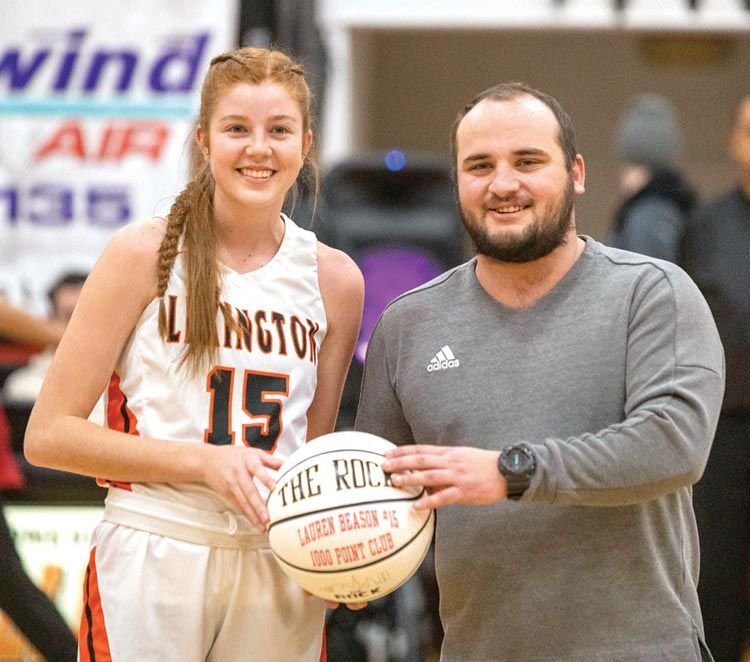 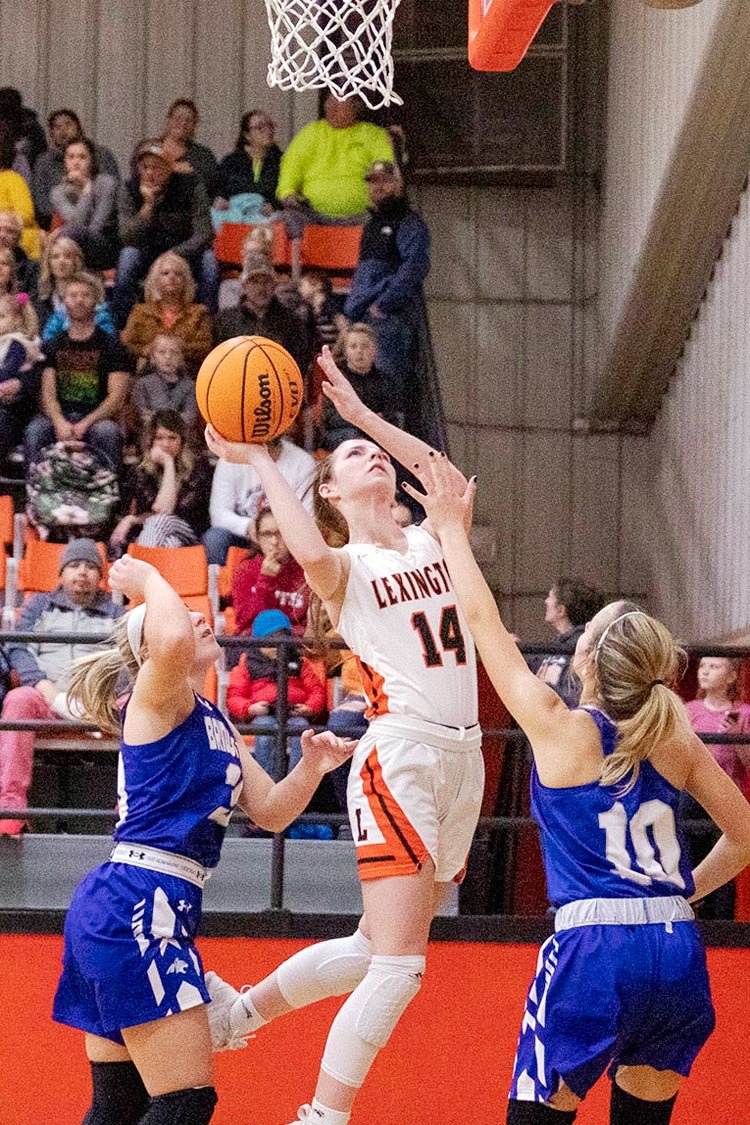 Emilee Jenks goes up for two of her team-high 19 points during Lexington’s 70-50 win over Bridge Creek. 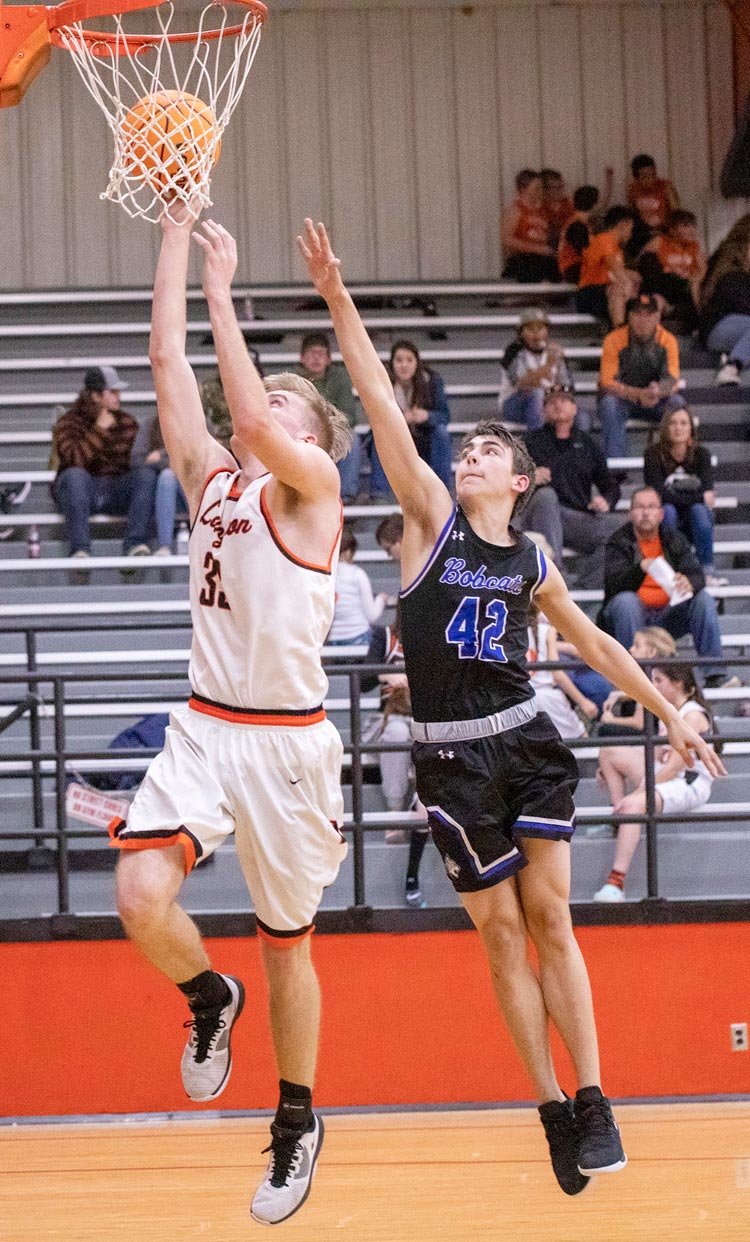 Josiah Dawley slips past the Bridge Creek defense for a layup during Lexington’s 53-39 win over the Bobcats last Thursday. Dawley scored eight points in the win.

The Lexington girls are looking sharp heading into the post-season.

Against Bridge Creek, Lexington never had a problem, holding a commanding 40-22 at halftime.

“Our game plan was to pressure them,” Lexington head coach Derek Clark said.

“We thought that with our athleticism, we could do that. That was the best way to play those guys in full court. We did a good job at times of running transition ball and making a lot of points.

“We had a lot of deflections and a lot of steals. It seemed liked we made more of our shots. But, the big thing was, we were getting our hands on the ball just about every possession.

“We didn’t have the best first-half but in the second half, we really tried to focus on our half-court defense,” Clark said.

“They’re tough, though. They play hard man-to-man on defense and we’ll have to force turnovers and be able to get out and run the basketball on them. We don’t want to be in a half-court situation with them.”

Clark commented further on what it’s going to take to move past Marlow.

“We pushed the ball on them the first time and that was the secret to our winning,” Clark said.

“If we get into a half-court game with them, they’re solid enough on defense that they’ll be hard to beat that way.”

Clark and his Lady ‘Dawgs are having a great year. They hope to keep things going in the playoffs.

“We’ve been talking about our goals all year,” Clark said. “We hope to make a big run in the post-season.

“Everybody is stepping up. Last week against Bridge Creek, it was the first time since I’ve been coach at Lexington that we had four people score in double digits. That’s big for us.

“I’m very excited for this team this year,” he concluded.

Lexington is looking good heading into Districts, having won four straight and six of their last seven contests.

Against Bridge Creek last Thursday at home, Lexington led the whole game. The ‘Dawgs were led by Jaylen Cottrell and Teagin Pruitt on the scoreboard. Both of those men scored 13 points each.

Josiah Dawley contributed eight points while Colton Penner down low had six points for the ‘Dawgs.

The visiting Bulldogs were being pesky, however. Lex put them in their place with a monstrous 23-4 outburst in the third quarter that sealed the victory.

“I have to give it up to Coach (Josh) Trent,” Lexington head coach J.D. Beck said after the game. “We knew they were going to be well coached and that Wayne was going to come in to our place and play hard. They really did.”

Beck credited his senior class for spurring the ‘Dawgs to victory.

“It was Senior Night for us and we had a bunch of people here for them and those players got some time on the floor,” Beck said. “It was just good to see all those guys go out there and play hard together. It took us a little while to get that ‘Mojo’ going again after those quick seven points to start the game. We got a little stagnant after that, but after halftime, we really turned it on.”

Lexington has been slow this year starting the second half. What was the secret to the ‘Dawgs putting down the clamps on Wayne?

“We have struggled with the third quarter but not this time,” Beck said. “I just think it was because of us having nine seniors on Senior Night really helped us. Five of our guys who don’t normally start were able to start tonight. It was homecoming and parents were here – maybe grandparents.

Now, it’s time for the playoffs. Lexington will host the Marlow Outlaws (12-10) on Friday night. Lexington has played Marlow twice this year already – winning, 41-35, at Marlow in January but losing, 32-31, last week at Lexington.

It will be the “rubber-match” between the two squads and Beck is excited to see how his team responds to the challenge.