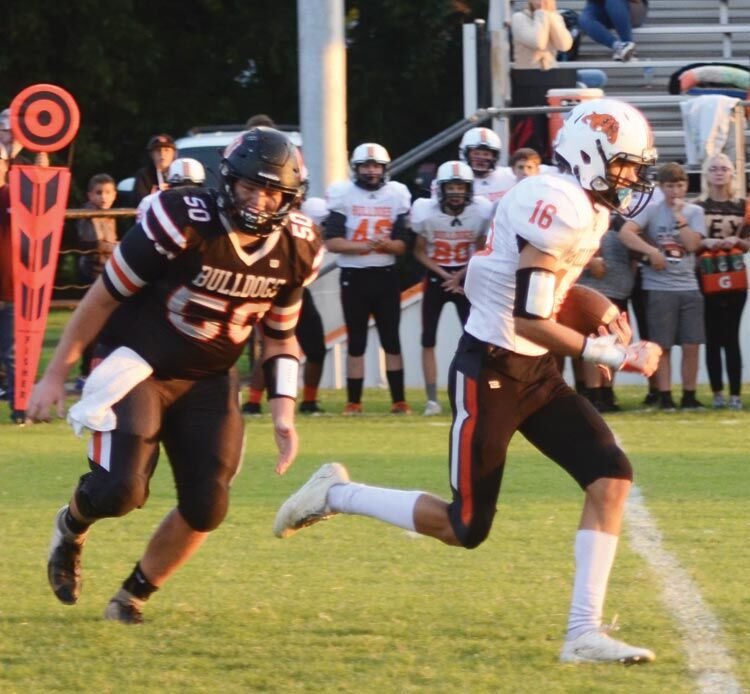 Dylan Cottrell returned a kickoff 85 yards for a touchdown against Wayne Friday night. Lexington was defeated by Wayne 22-21. 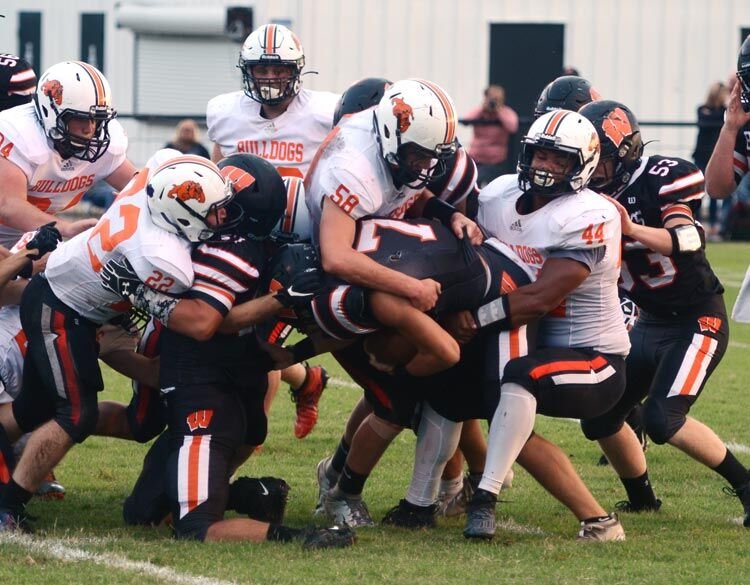 Lexington dropped to 1-1 on the young football season last Friday night when the ‘Dawgs traveled to nearby Wayne and lost a heart breaker, 22-21, to the hosts.

Wayne’s Bulldogs were the first to score on a four-yard run in the first quarter. The two-point conversion failed but the burst gave Wayne a 6-0 lead to start the contest.

Dylan Cottrell returned a kickoff 50 yards for touchdown and Israel Trejo booted the point-after try for a 7-6 Lexington lead.

Chase Johnson caught a 57-yard touchdown toss from quarterback Ezra Faulkenberry and Trejo kicked the PAT to give the ‘Dawgs a 14-6 advantage at the end of the first quarter.

Cottrell caught a 73-yard touchdown pass from Faulkenberry in the second period and Trejo was good on the PAT for a 21-6 lead. But, Wayne came back and ran the ball in from five yards out and the two-point conversion was good, leaving Lex with a 21-14 lead going into the locker room at halftime.

Both teams went back and forth in the second half. After Wayne drove the ball down the field and scored from one-yard out, they secured the victory with a successful two-point conversion for the final 22-21 outcome.

“We failed to execute on a few things,” Lexington Head Coach Keith Bolles said. “We have to use that game as a learning experience and try to gain from it. It will help us in our quest to get ready for District play. We were up 21-6 at one point and we had the football with just two minutes before the half. We fumbled the ball and they were able to punch it in to make it 21-14 at halftime.

“The second half was a back and forth struggle. They finally got a drive going in the fourth and put the ball in the end zone and then ran a two-point conversion. Our last pass of the game was knocked down in the end zone. It was a tough one to lose.”

While Lexington held the advantage in the passing game, Wayne’s running game proved to be too much for Lex to keep up with. Faulkenberry completed nine of his 14 passes for 171 yards and two touchdowns. Wayne could only muster 19 yards through the air.

But, on the ground, Wayne certainly showed superiority as they gained 341 yards rushing on 51 attempts. Meanwhile, Lex could only manage 21 total yards rushing. Wayne had 13 first downs compared to five for Lexington.

Wayne’s junior quarterback Ethan Mullins proved to be the star of the battle. Mullins scored all three touchdowns for Wayne and intercepted the final pass by Lex in the end zone. Mullins rushed for 212 yards on 37 carries in the contest.

“They run plays especially for him and he did a great job with that,” Bolles said of Mullins. “We thought we had him wrapped up a few times and he just squirted out and gained extra yards. That’s another thing we need to work on. We just need to be sure to secure our tackles.”

Lexington travels to Bridge Creek to visit the Bobcats at 7 p.m. Friday night. Bridge Creek (a Class 3A school) lost to Community Christian, 44-7, September 4. The Bobcats then lost to Class 4A Harrah, 12-0, last Friday evening.

“Bridge Creek has had two tough opponents,” Bolles said. “In week one, they played Christian Heritage and this past weekend they played Harrah. We’re going to make some adjustments this week so we can get ready for district play.

“These first few games are important and they are learning experiences, too. We’re still working out combinations of who goes in certain plays and who goes where on certain downs. That’s the thing about football. You find what fits best and what schemes work well for you. When we get things settled, we’ll be ready for district play.”

Dalton Matthews was nominated for both the Offensive and Defensive Lineman of the Week honors for the ‘Dawgs. On defense, Matthews recorded three solos and 12 assisted tackles for Lexington against Wayne.