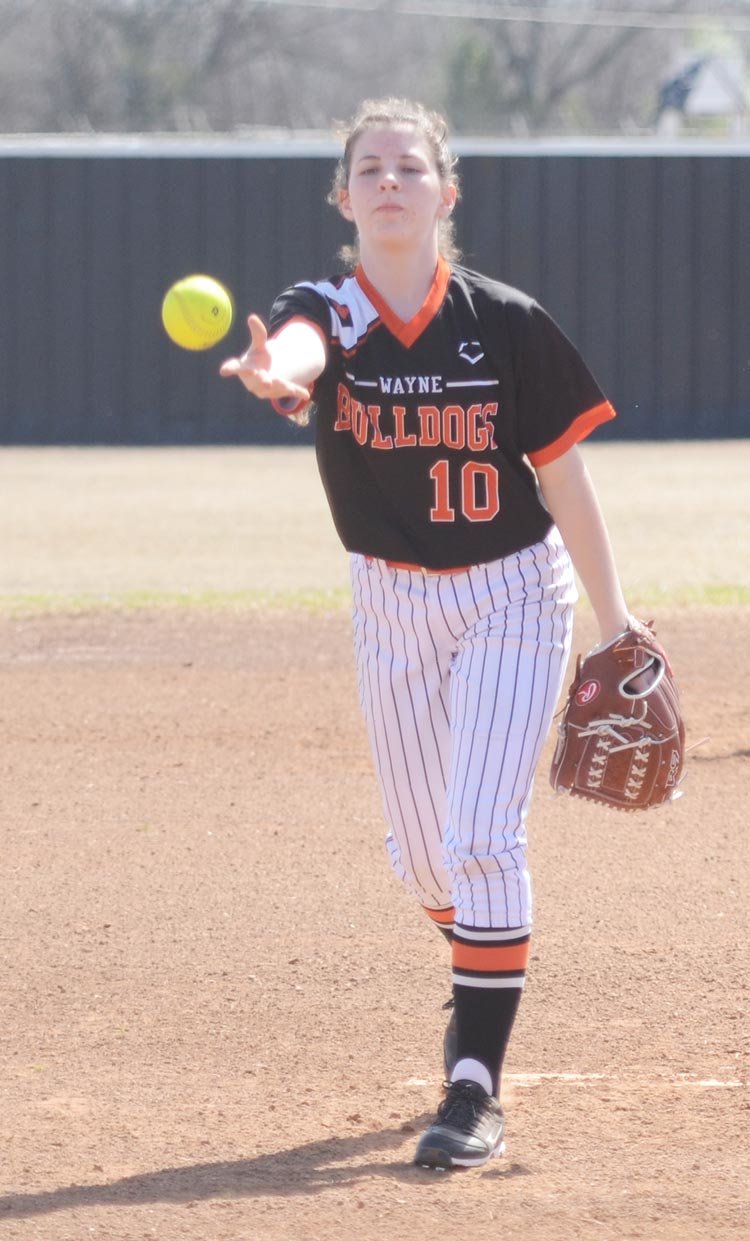 Kaylee Madden pitches for Wayne in Lexington during the Lexington softball tournament. The Bulldogs fell to Harrah 19-5. 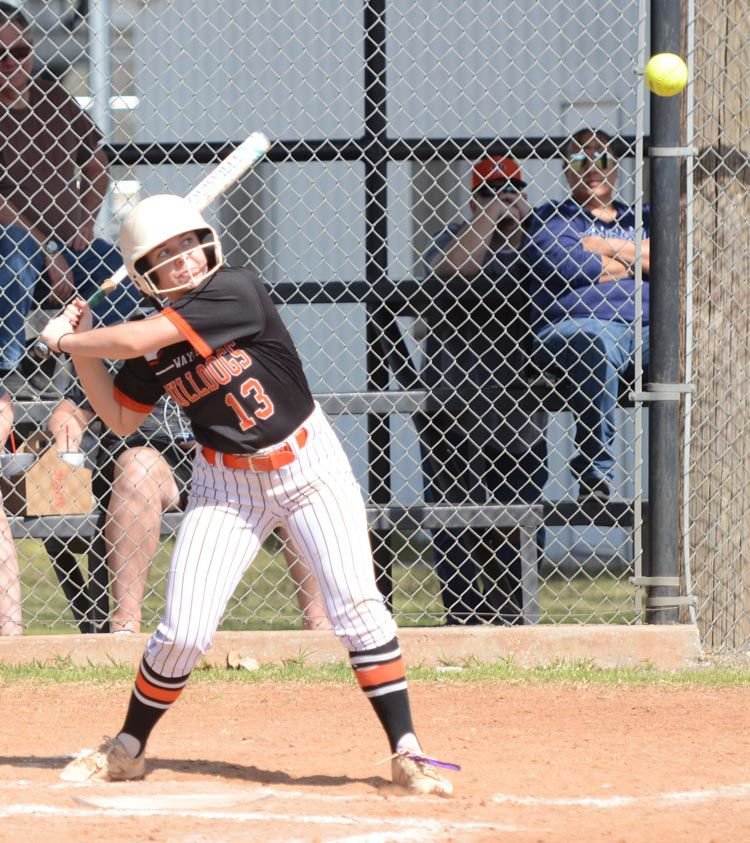 Kamryn Moss prepares to swat a pitch during the Lexington softball tournament. Wayne was defeated 19-5 by Harrah.

Last Tuesday, Wayne was in Chickasha for games with Apache and Ft. Cobbs.

The Lady Bulldogs were on the short side of the score in both contests, falling to the Lady Warriors of Apache 24-1 and 14-2 to the Lady Mustangs of Ft. Cobb.

In game one, the Lady Warriors ripped off 19 runs in the first inning to take a hefty lead they would never relinquish.

Wayne’s Bailey Kennedy scored their lone run in the first inning on an RBI from Mayce Trejo.

Seven Lady Bulldogs had hits in the loss.

In their second game in Chickasha, Wayne scored its lone runs in the first inning.

Ft. Cobb answered with 14 runs in the bottom half of the first inning to seal their run-rule win.

Later in the week, Wayne was in Lexington for the Lexington tournament.

Their first game was a 13-2 victory over ECP.

In the first two innings, Wayne scored three to hold a 3-0 advantage.

ECP got two across the plate in the top of third to chip away at Wayne’s lead.

Thanks to singles by Emily Woody, Raedyn Dean, Bailey Kennedy, Kamryn Moss and Kaylee Keeler and double by Trejo, Wayne added seven runs in the third to seal their win.

Kaylee Madden manned the circle for the Lady Bulldogs. She pitched five innings, allowing eight hits and only two runs.

Next up for the Lady Bulldogs was Harrah, who was hot from the get-go and handed Wayne a 19-5 loss.

Harrah tallied 11 runs in the first inning, while Wayne scored one of their own.

Things didn’t cool down for the Lady Panthers as they added nine more runs in the second frame.

Wayne held them scoreless in the top of the third and got four runs across in their half. But, it wasn’t enough to edge the Lady Panthers.

Wayne had ten hits in the loss. Dean, Parker and Trejo each had multiple hits.

The loss to Harrah sent Wayne to the losers bracket where they faced Riverside.

In an extra-inning heartbreaker, Wayne fell to the Lady Braves 8-7 to end their run in the Lexington tournament.

The Lady Bulldogs and Braves matched each other with two runs in the first inning.

Both teams were held scoreless through the next three innings.

Wayne added four runs in the bottom of the fifth inning to take the 6-2 lead.

Riverside got two more runs  in the sixth and Wayne added one of their own.

The Lady Braves added three more to knot the score at seven-all and send the game to an extra inning.

Wayne couldn’t hold Riverside and allowed one run in the top of the eight.

Due to the ruling by the State Board of Education to close schools and suspend all extracurricular activities until April 6, the current schedule of games has changed drastically.

The Lady Bulldogs are scheduled to host Lindsay on April 6 and travel to Paoli on April 7.