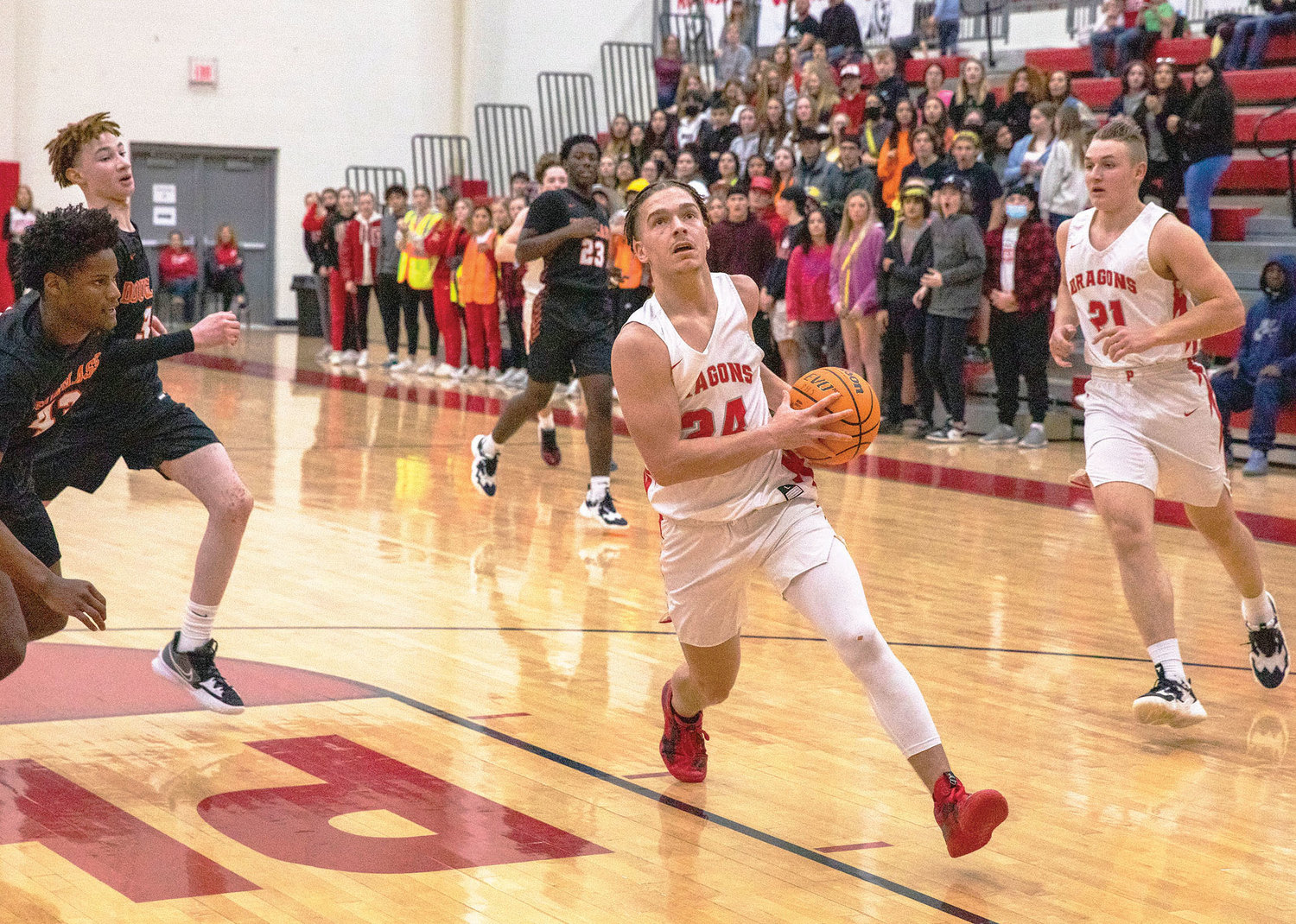 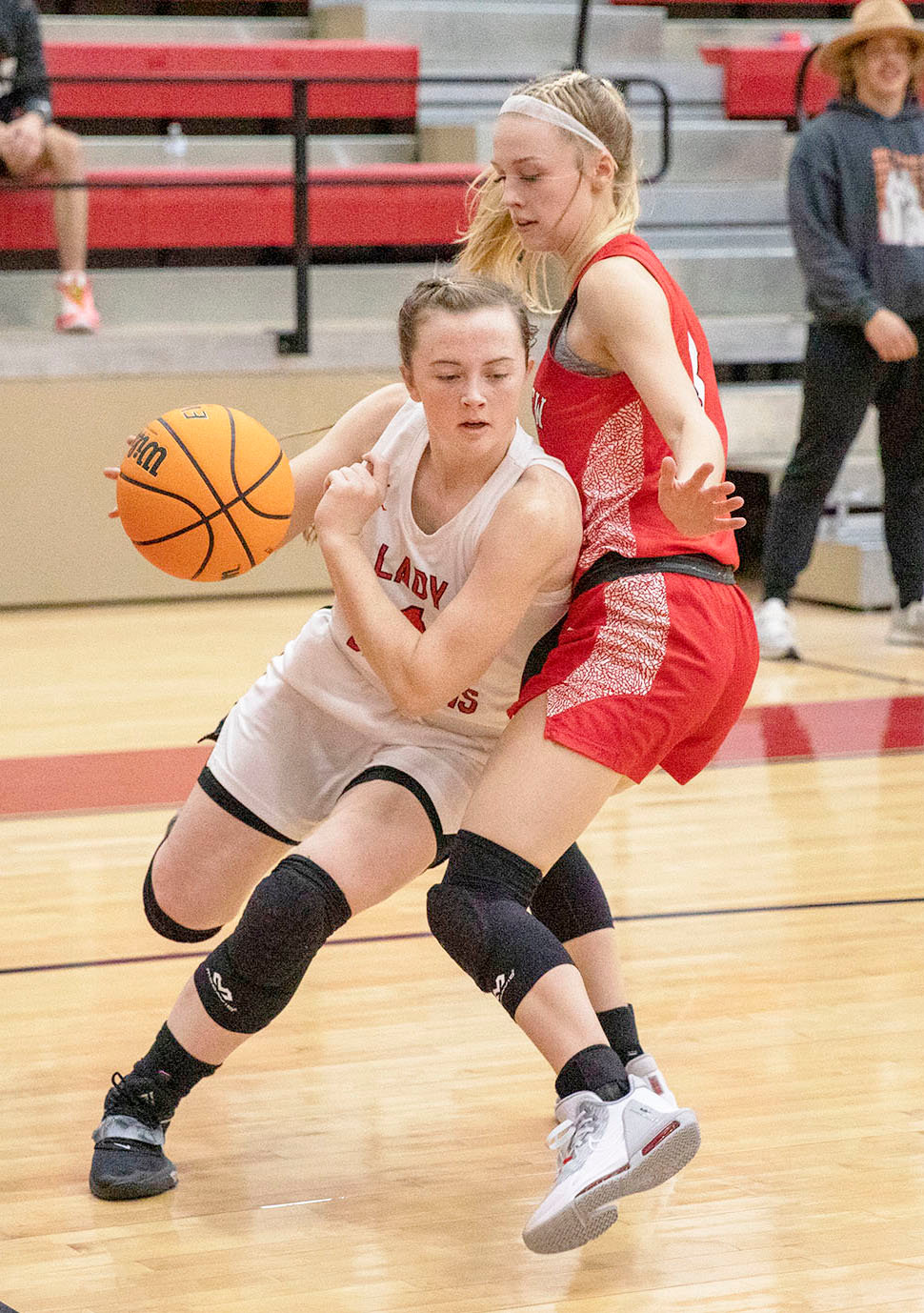 Purcell junior Lauren Holmes cuts around the corner against Plainview during the Heart of Oklahoma Basketball Tournament. The Dragons were defeated 49-31.
Greg Gaston - double g images 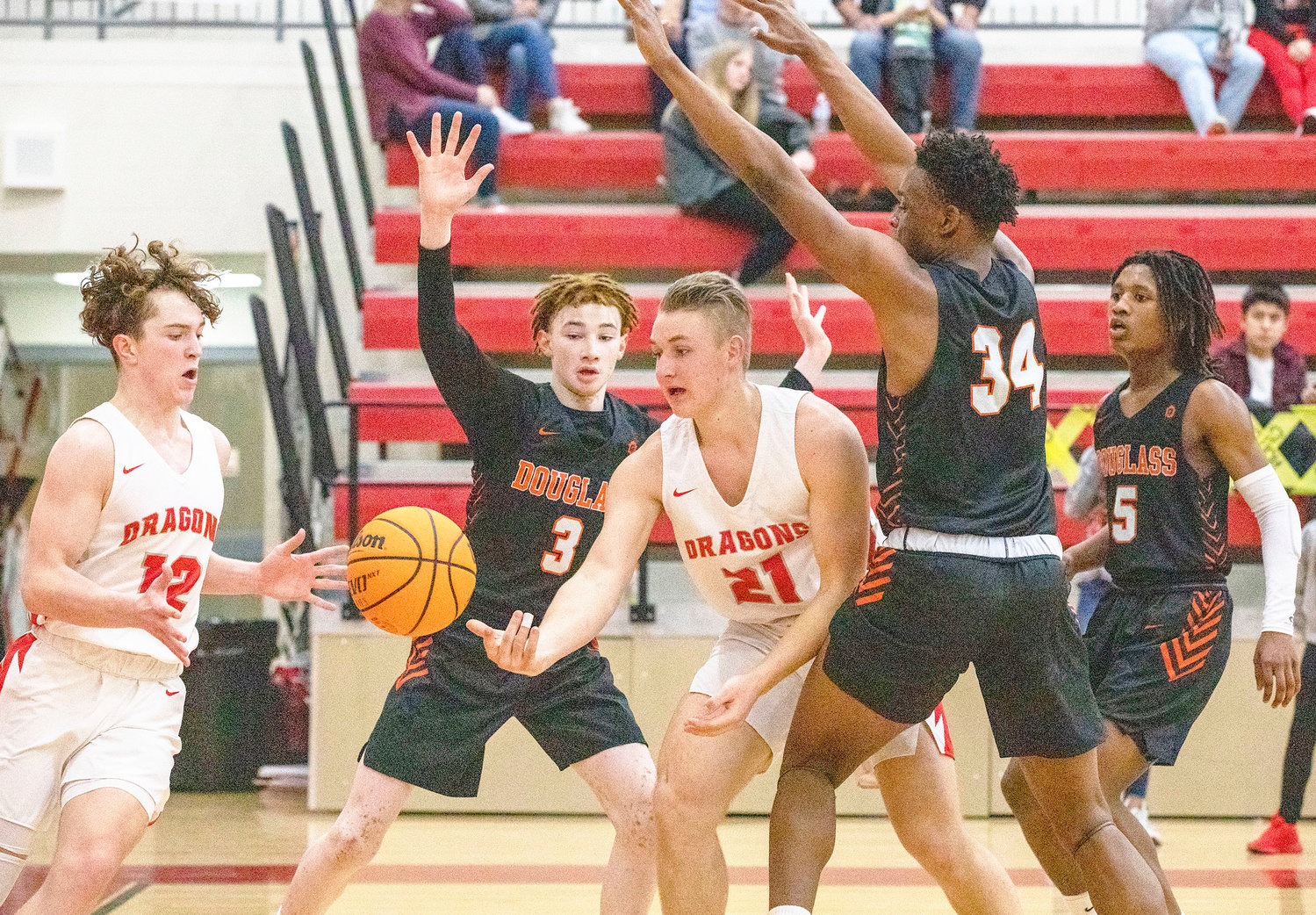 Purcell’s boys sandwiched victories over Elgin and Blanchard around a 44-38 semifinal loss to Douglass to finish third in the 2022 Heart of Oklahoma Tournament.

Lincoln Eubank and Hayden Ice led the scoring in the tournament for the Dragons knocking down 37 and 31 points respectively.

Nate Willis had 20 points in the loss to the Trojans to lead all scorers in that contest.

Purcell played short-handed in the tournament with two starters and their sixth man missing.

“I could not be more proud of our guys,” head coach Roger Raper said. “We have had two starters and our sixth man, a combined total of 20 points per game, out for the past two weeks along with a few COVID cases. So we have definitely had some adversity. Through it all our guys stepped  up and have gone 3-1 during that time frame along with finishing third in the Heart of Oklahoma Tournament.”

Sophomore Jett Tyler and freshman Brayden Tharp have really stepped up to the plate for the Dragons in the meantime.

“Sophomore Jett Tyler and freshman Brayden Tharp have come in and been very solid especially on the defensive end of the court,” Raper continued.

“Senior Nate Willis has lead this group with his incredible leadership and tremendous play on both ends.

“Juniors Hayden Ice and Lincoln Eubank were very steady and consistent both making great contributions in the paint and with perimeter scoring,” the coach said.

Purcell did not play at Washington in a regularly scheduled game due to COVID.

They were 9-3 on the season heading into the game at Davis Tuesday night.

“We should know something soon on the status of junior Malachi Evans and freshman Kobe Freeman returning.” Raper said. “We are also hopeful for the return of senior Adolfo Vasquez this week  from injury. All in all the grit of this team continues to impress on a daily basis.

“We are defending extremely well and have done this with basically five players playing over 95 percent of the minutes. That’s not an easy task.”

Coach David Sikes’ Dragons were 8-5 heading into the Davis game.

They lost at Washington 47-44 and won one game in the Heart, a 54-21 beat-down on the Elgin Lady Owls, led by freshman Kenna Esparza’s 11 points.

Esparza cut the nylons for 12 leading Purcell in scoring in the 49-31 tournament opening loss at the hands of Plainview.

Junior Lauren Holmes was the only Dragon in double figures against CCS with 10. CCS defeated Purcell, 66-44.

Purcell is scheduled to play at Pauls Valley Friday and travel to Bridge Creek February 1.

“This year’s Heart of Oklahoma Tournament was a tough one for us for sure,” Sikes said.

“We played some tough teams this season and my girls continue to learn and grow with every play.

“Now I hope that down the stretch we will take what we’ve learned and finish strong,” Sikes concluded.

Ada’s girls knocked off Blanchard 39-66 for the championship while Douglass hit a buzzer-beater to hand Anadarko a 41-38 setback in the boy’s title game.