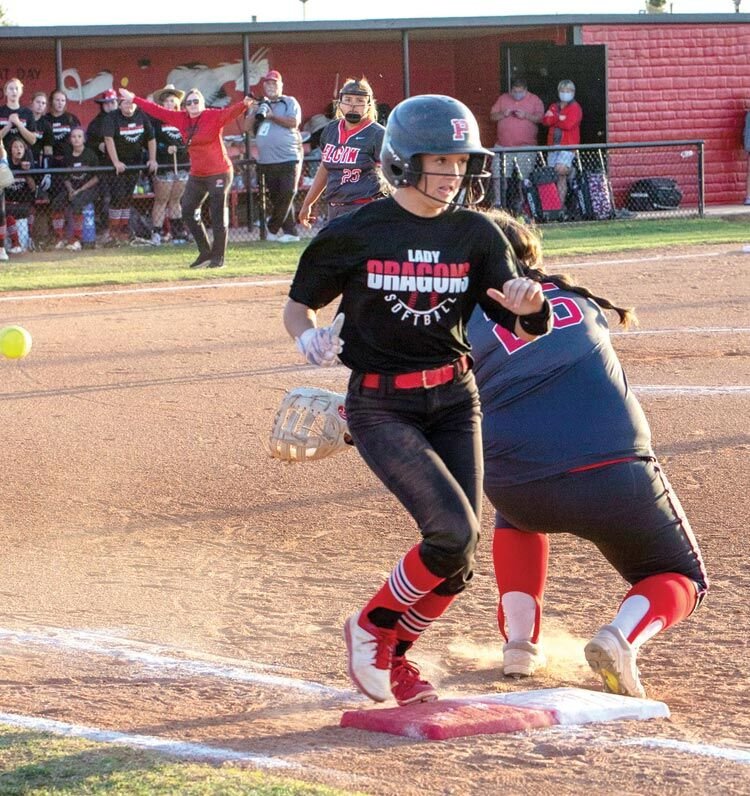 Khia Tyler runs out a hit against Elgin during Purcell’s bi-District tournament against the Owls. Purcell advanced to the Regional tournament where they play Newcastle today (Thursday) at 2 p.m. 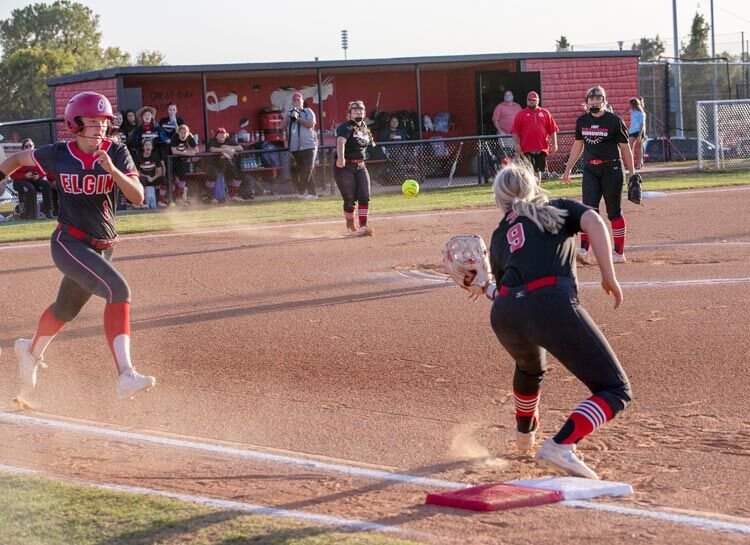 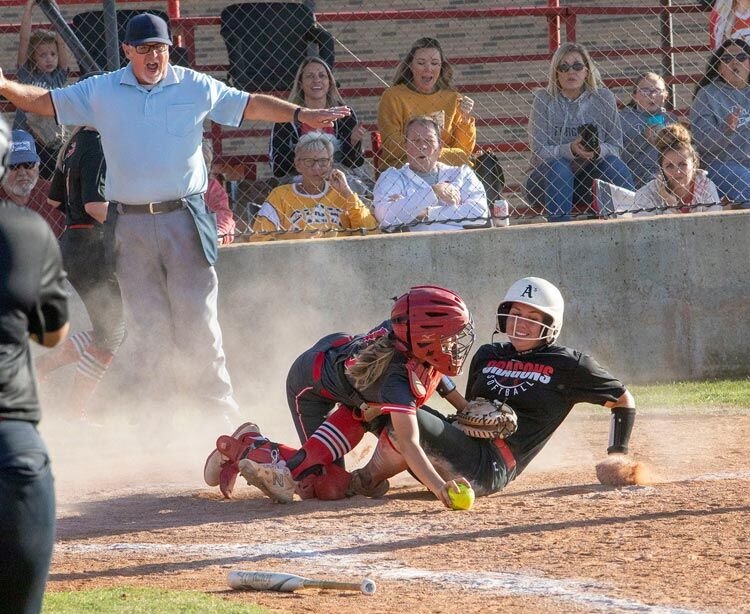 Brook Fleming safely slides into home after dislodging the ball from the catcher’s mitt during Purcell’s bi-District clash with Elgin. The Dragons lost the first game to the Owls 8-7 before coming back to win two games (14-2 and 21-19) to advance to Regionals.

After dropping the first game of the Bi-District Tournament to Elgin here last Thursday 8-7, Purcell roared back with back-to-back victories to advance to the Regional Tournament at Lone Grove.

That tournament begins today (Thursday) and goes through Friday.

Also in the tournament are the host Longhorns, Anadarko and Newcastle.

Purcell opens the tournament today at 2 p.m. against Newcastle, the team that beat them last year in the State Finals.

With their backs to the wall the Dragons didn’t waste any time in the second game of the Bi-District scoring three runs in the first inning, one in the second and erupted for seven runs in the top of the third on their way to the run-rule victory.

“We had two choices - fight back or give up and they fought back,” head coach Sarah Jones said. “We fed off their errors and made things happen.

Karson Jennings went 4-4, Lauren Holmes and Kyleigh Smedley had a pair of hits.

Missy Nimsey, Khia Tyler and Kinley Croslin all had hits as well.

“I’m beyond proud of Kaylee Stephens stepping in and pitching the entire game,” Jones said.

She limited Elgin to four hits.

“And, she kept her pitch count way down with 74,” the coach said.

Purcell’s defense backed her and the offense was there for her to just get up there and do her job and she did.

Purcell out-hit Elgin 11-4 in the game that set up the rubber match and the ticket to the Regional.

The finals were a slug-fest with a combined 29 hits. Purcell held off the Owls 21-19 after taking a 21-12 lead into the seventh inning.

Elgin cranked out seven runs before Purcell was able to get the final out and advance.

“What a dog fight from both teams,” Jones said. “It seemed like a slow-pitch game.”

Hannah Buchanan went 4-4 with a grand slam, Croslin went 3-5 with four RBIs. Tyler went 3-6, Nimsey 3-4, Holmes had a pair of hits, and Smedley and Brook Fleming both had singles as well.

“We went back and forth and Elgin put up a good fight,” the coach said.

Fleming, Kaylee Stephens, and Kailyn Helton all shared the circle and it was complete team effort.

“Stephens and Helton have only pitched JV games this year and they stepped in and helped out when it mattered,” Jones said.

“It took an entire team to win these games. We were hit with adversity left and right that day and we pulled through. It was great to see how it all played out and the fight that they had,” Jones said.

Jennings and Buchanan both had grand slams on their home field as seniors.

“That gave us all chills,” Jones said.

“The dugout was loud the entire day and we made so many amazing diving plays in the outfield and infield.

Smedley nailed a runner at home from center field.

“Everyone stepped up and covered ground and believed in each other. It was long but it was a good day,” she said.

Jones said her team decided to come together when they played Pauls Valley September 29.

“We decided to come together and just completely dominate and changed our mentality,” the coach said.

Buchanan went 2-4 with a bomb.

Tyler, Croslin, Buchanan and Holmes all had two hits.

Purcell stranded only five base runners.

Smedley and KK Eck both had a hit.

“Fleming did great in the circle and our defense backed her. It was a great game to lead us into Bi-District,” Jones confirmed.

“It was a good game to prep for Regionals. Our hitting was great. We hit it hard and made some great plays,” Jones said.

Nimsey led the offense with a  3-3 performance.

Fleming and Buchanan both had a pair of hits.

Purcell only managed six hits but pushed across runs when they needed to.