Bulldogs even record to 7-7 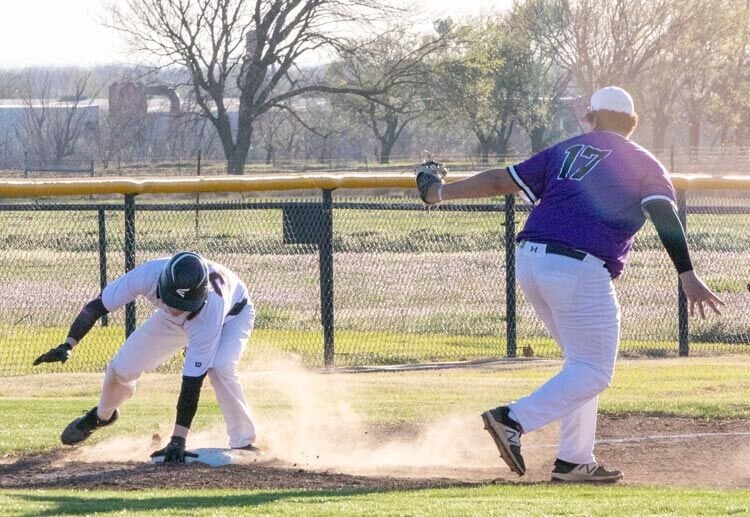 Wayne junior Braxton Smith reaches third base ahead of the throw Monday evening during Wayne’s five-inning game against Elmore City. The Bulldogs were defeated 11-1.

On Monday, Wayne was at home for the first time this season, hosting Elmore City.

The Badgers beat the Bulldogs 11-1.

Ethan Mullins had the lone hit for the Bulldogs.

“We fell apart in the third inning. We could not catch a flyball and we never got our bats going,” head coach Shane Collins said.

“Errors and walks are killing us right now.”

Calera was in town Tuesday for a double header with the Bulldogs.

Back from Spring break, Wayne’s Bulldogs hit the diamond in the Central Marlow tournament last week.

It started well with a 6-2 win over Big Pasture.

“We hit the ball pretty well against Big Pasture. We got the lead early and stuck with it. I credit Kaleb for pitching well to help us win that game,” Collins said.

Kaleb Madden was on the mound for the win. He threw for seven innings giving up eight hits and striking out nine.

“Kaleb threw a good game for us. He limited walks which is a key in our gameplan,” Collins said.

In their second game of the Cental Marlow tournament, Wayne  lost to Cement, 7-3.

“We struggled in that one. We could not hit out of the infield and could not find the strike zone,” Collins said.

Wayne had four hits and two RBIs in the loss.

Rounding out their showing in Cental Marlow, Wayne lost to Maysville, 8-3.

“We could not capitalize in this game. Our hits went right to them and we were swinging at balls we should not be swinging at,” Collins.

With bases loaded in the first two innings, Wayne was unable to push runs across the plate.

Starting Thursday, Wayne is in Stratford for a round robin with Stratford, Wynnewood, Maysville and Asher.

Friday’s game with Asher is at 1 p.m. Saturday, the Bulldogs have a noon game with Maysville.

“We’re working on putting the ball in play. That’s a big part of 2A baseball. We have to get the ball on the ground and make them make plays.

“We’re fast on the bases, so making them make plays is key,” Collins said.