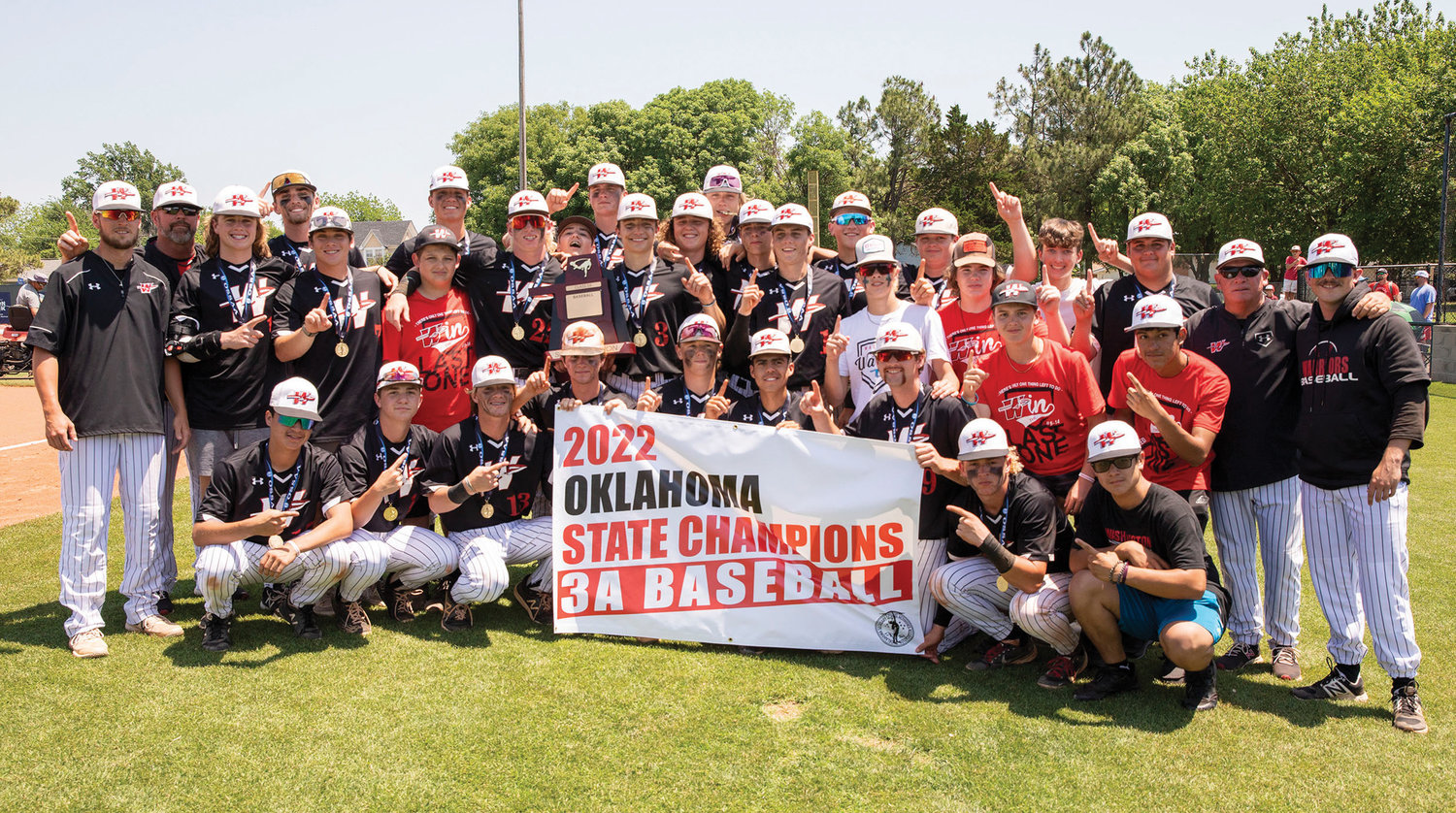 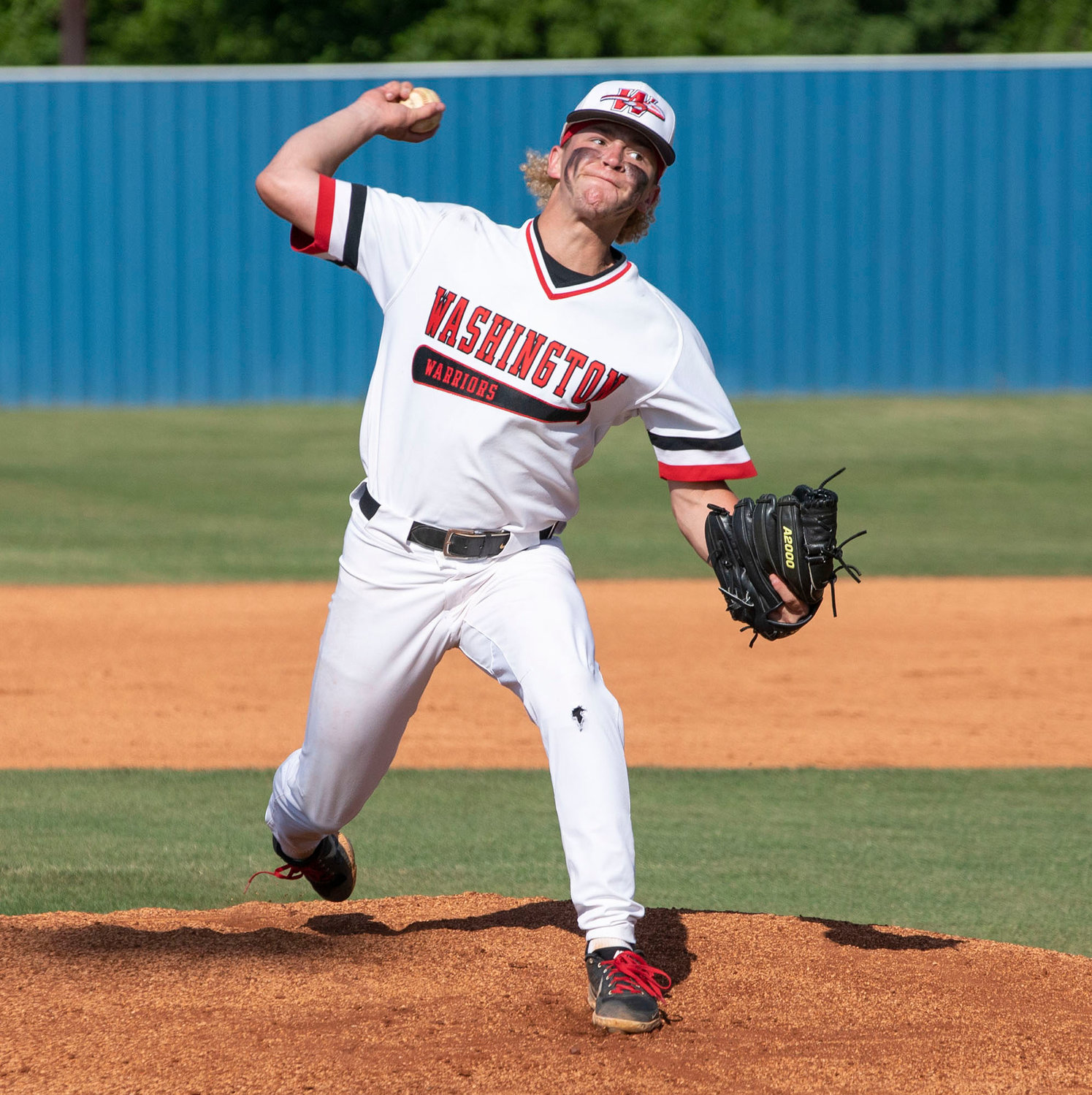 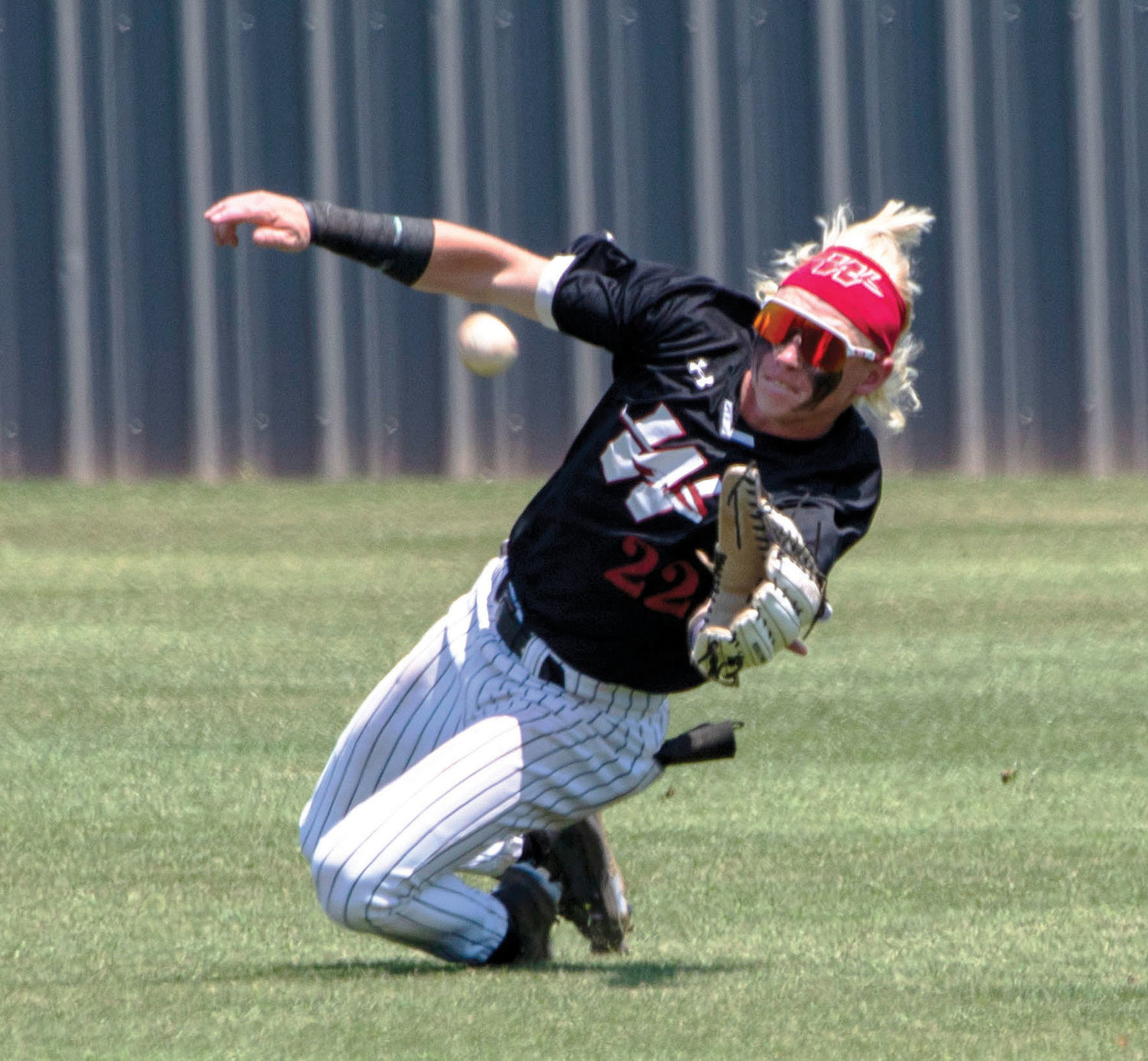 Washington senior Reese Stephens makes a diving catch in the outfield before throwing out a runner who failed to tag up during Washington’s 13-2 win over Kingston in the championship game of the Class 3A State tournament.
Greg Gaston - double g images
Previous Next
Posted Thursday, May 19, 2022 9:00 am
John Denny Montgomery

The Washington Warriors saved their best baseball of the season for the right time.

They defeated Victory Christian 15-5, Salina 9-4 and Kingston 13-2 to claim the Class 3A State championship – the first baseball title in school history

“We had a three-day performance where we played our best baseball,” said head coach Jeff Kulbeth, who just finished his fifth year as the Warrior skipper. “If you want a perfect scenario it’s to go out and play your best ball Thursday, Friday, Saturday of the State tournament!”

The Warriors were indeed dazzling.

Their hot starts at the plate put pressure on opponents all tournament long.

In the opening game against Victory Christian, Washington scored 10 runs in the top half of the first inning.

“We talked about the guy Victory was going to throw and we knew he was (throwing) in the mid-80s,” Kulbeth said. “We wanted to stay simple and don’t chase and be disciplined. We got a couple swinging bunt hits, he walked a couple and then we got a couple hits before we broke it open for a 10 spot in the first inning.”

Cam Bates went 4-4 at the plate, scored three runs and knocked in three RBIs. He had two doubles.

Canon Stewart  was 2-2 with a pair of walks. He was responsible for four ribbies.

“To be up 10-0 after the first inning is appealing,” Kulbeth quipped. “But as a coach you always want more and get nervous about them coming back.”

A grand slam by Victory Christian’s nine hole hitter gave the Warrior skipper a scare but Washington answered with another run in the third and three in the fourth.

“We answered after the grand slam and slowed their pace,” he said.

Sophomore Marlon Moore got the start on the mound and had four Ks over five innings.

“We got a good outing from Marlon on the mound to start things,” Kulbeth said. “We had three good outings in the tournament from our pitchers.”

The offensive approach for the Warriors at the dish was similar in the Salina game as it was against Victory Christian.

“It was another mid-80s guy and I told them to be disciplined again and get his pitch count up,” Kulbeth said. “He was at 107 or 108 pitches when he left.”

Washington scored two in the first inning and two more in the third before Salina got on the board with a run in the fourth.

The Warriors finished strong with two runs in the sixth and three in the seventh to preserve the early lead.

McCaskill kicked off the scoring with a two-RBI double in the first inning. He walked twice as well.

Senior Reese Stephens went 3-4 with a pair of RBIs on top of scoring three runs himself.

Stewart started on the bump and only gave up two hits through 3 2/3 innings.

Kade Norman closed out the final 3 1/3 of the game.

“Canon threw really well on the mound,” Kulbeth said. “Kade came in and they put him in play early but didn’t do much to us.”

The Warriors continued the hot-start trend in the finals against the Redskins.

They scored one in the first inning and added five in the second.

After a scoreless third and fourth Washington finished strong with two in the fifth and five in the sixth.

“We had timely hits and ran the bases well,” Kulbeth said. “We knew Kingston had thrown their two best pitchers Thursday and Friday.”

Kane Springer went 2-3 with a walk and had three RBIs.

McCaskill went 2-4 with a pair of RBIs and scored twice. He put the icing on the cake with a two-run homer in the final inning.

Washington was able to kill any momentum Kingston had near the end of the game when Stephens made one of the best plays of the season with a diving catch in the outfield, followed by a throw back to first base to double up the runner.

The Warriors had a bounce in their step as they entered Saturday’s game.

“Right before we got off the bus I talked to the team about the difference between confidence and arrogance,” Kulbeth said. “We played loose with straight confidence and we played with the mentality of ‘we’re going to win’”.

“I wanted to take Tristin out earlier but he said ‘I have more in me,’” Kulbeth said. “And he did.”

It was a tournament for the ages for the Warriors and the culmination of Kulbeth instilling the mind set into his players of building a program.

“I’ve been telling (former players) that this is a program title. I had guys buy in five years ago and I couldn’t be more proud of what’s taken place,” he said. “We talked as a team (after the game) and I told them the team who walked off the field as champions wasn’t the same team we were at Spring Break or even a couple weeks after. I could see in their preparation and their approach that they wanted to be special.”

The Warriors finished the season 31-9.