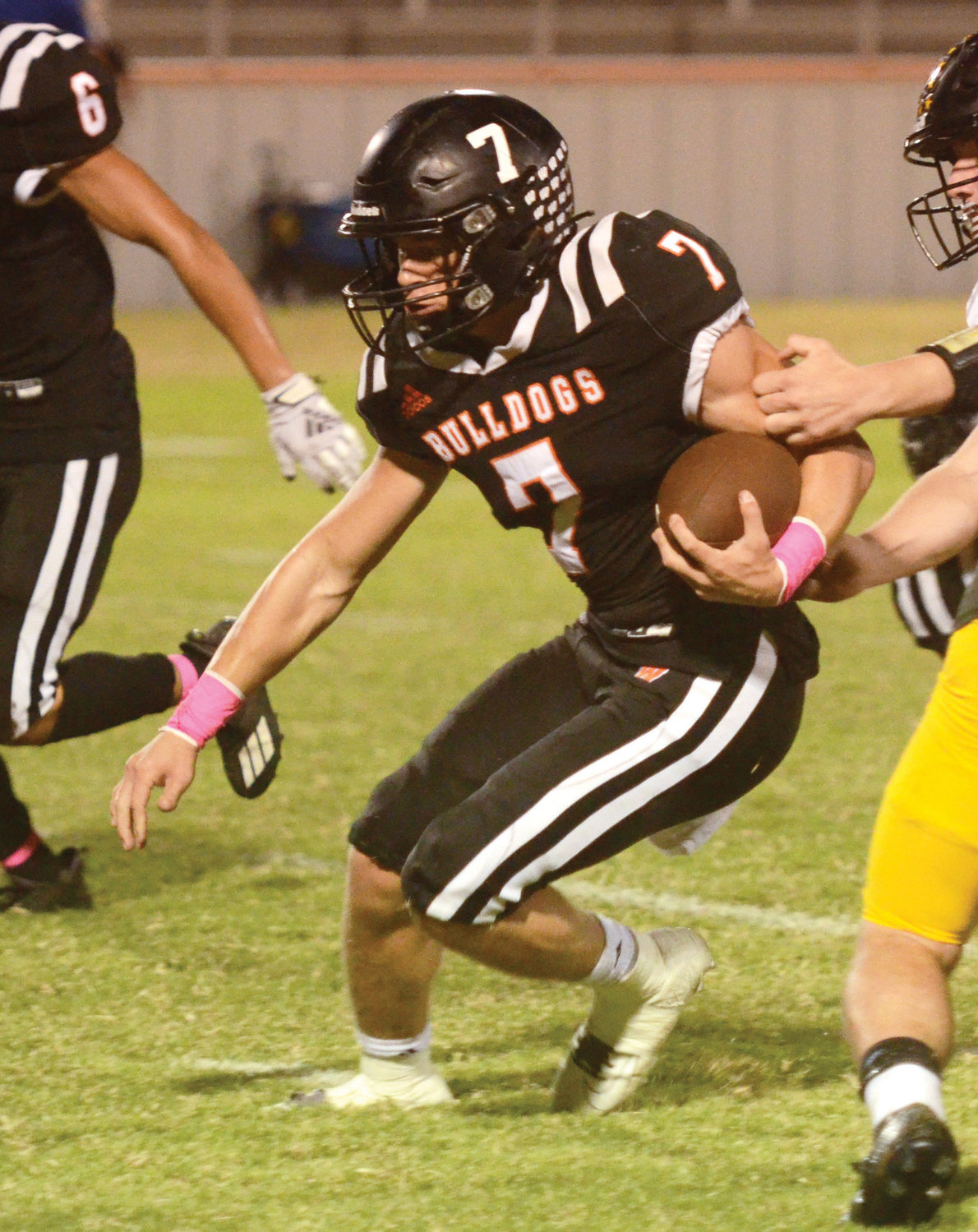 Wayne senior Ethan Mullins carries the ball for some of his 230 rushing yards Thursday night during the Bulldogs’ 51-0 win over the Demons. Mullins also threw for 129 yards and finished the night with seven touchdowns.
John Denny Montgomery 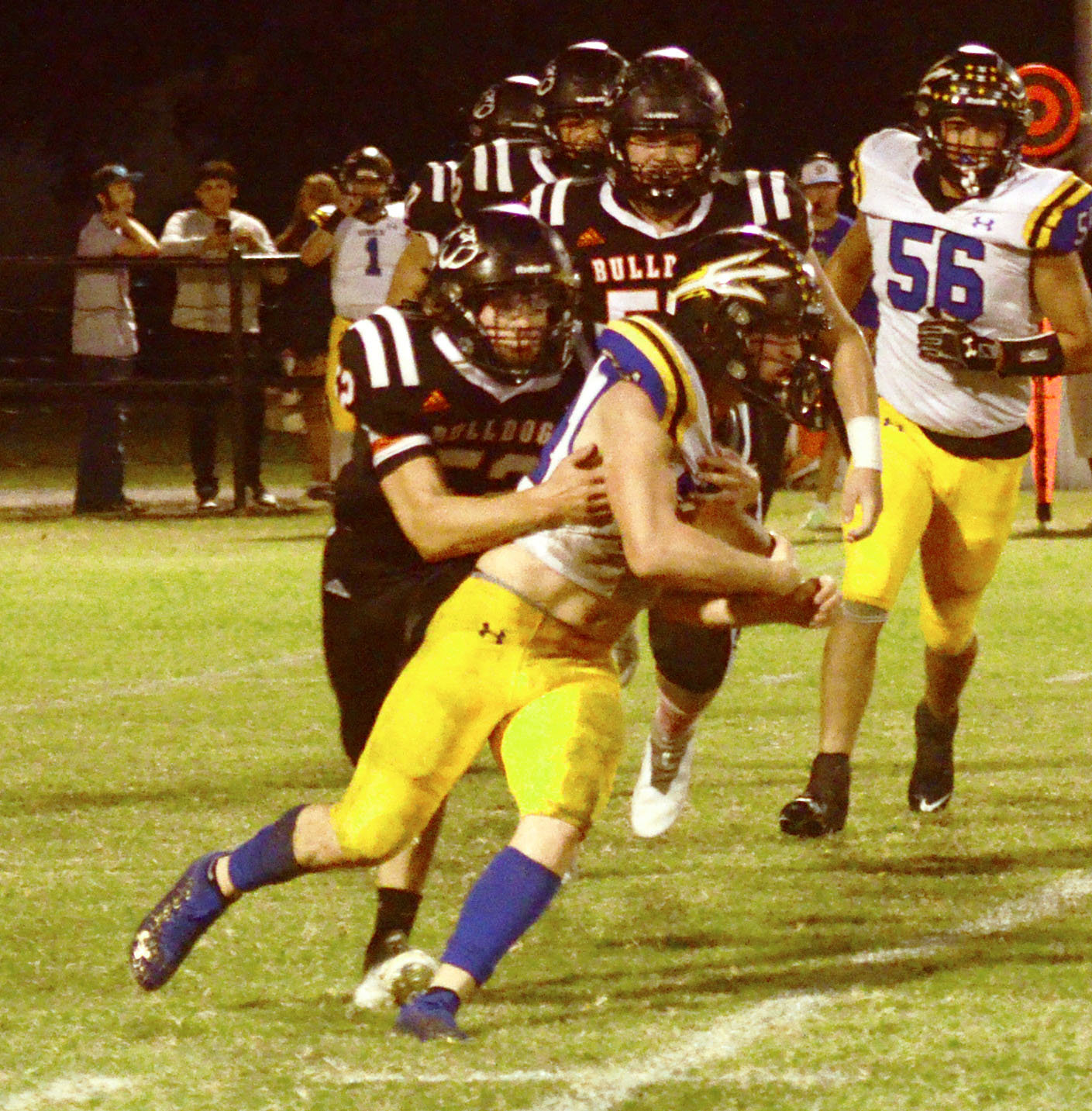 Wayne senior Kevin Bynum wrestles down a Dibble ball carrier Thursday night during the Bulldogs’ 51-0 victory over the Demons. Bynum had four tackles and a sack in the game.
John Denny Montgomery
Previous Next
Posted Thursday, October 21, 2021 9:00 am
John Denny Montgomery

Wayne and Elmore City will battle it out under the bright Friday night lights as the two unbeaten brutes position for District superiority.

Wayne rolls into town for the 7 p.m. kickoff sporting a 7-0 record while the Badgers of Elmore City sit at 6-0.

“It’s a big game and it’s turned into a rivalry,” said head coach Brandon Sharp. “They want to beat us extremely bad after last year.”

The Badgers have talented athletes across the board with a combination of size and speed.

Offensively Elmore City bases out of the wishbone and flexbone formations and they have a formidable front line.

“They have two of the best lineman we’ve seen and we’ll have to do a good job of staying low,” Sharp said. “We’ll have to play well (up front).”

On defense the Badgers run a 4-3 front.

“They have active linebackers, a huge d-line and the back end is extremely athletic,” Sharp said. “It will be a challenge but we feel like we have a decent offense to go against them.”

The winner of this game will more than likely be set up to play Ringling for the District title.

“It should be a lot of fun Friday,” Sharp said. “We’ve been in this situation before and have a bunch of seniors and they know what’s at stake.”

Wayne rolled the Dibble Demons 51-0 Thursday night on the legs of Ethan Mullins.

The senior signal caller rushed for 230 yards and six touchdowns. He added 129 yards and another touchdown through the air, which was hauled in by Brannon Lewelling.

Mullins has rushed for over 1,700 yards and 31 touchdowns through seven games.

Lewelling added another 148 yards rushing on 13 carries, averaging over 11 yards per play.

Junior Rhett Kennedy had three carries for 37 yards and scored a touchdown on an eight-yard tote.

In all, Wayne rushed the ball 53 times for 488 yards and racked up 617 yards of total offense.

“We had a good night against a good team,” Sharp said. “It was one of those games where everything was working.”

The first-team defense has only allowed one score all season.

“Those dudes are playing well,” Sharp confirmed. “They showed up and kept Dibble at bay and played well against a good team.”

Lewelling led the way with 11 tackles and a sack while Mullins recorded five tackles and forced a fumble.

Kaleb Madden picked off a pass for the second week in a row and had four tackles.

Kennedy also intercepted a pass and had three tackles while Eli Hobson had two tackles and a fumble recovery.

“The defense has been getting after it pretty good,” Sharp said. “Our defensive line does their job and it allows the linebackers to run and make plays.”

Sharp’s nominee for Heart of Oklahoma Offensive Lineman of the Week was Cody Davis. He graded out at 72%.

Sharp’s nominee for Heart of Oklahoma Defensive Player of the Week was Brannon Lewelling. He had 11 tackles and a sack.

Mantooth registered four tackles, had a sack and forced a fumble at defensive tackle.

“We’re pleased with the work the team has put in – it’s showing,” Sharp said. “Now we have the opportunity to play another undefeated team who is playing well.”